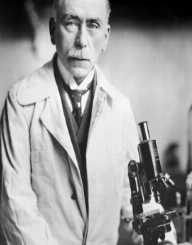 Jules Bordet was born on June 13, 1870, in Brussels, Belgium. His parents were Celestine Vandenabeele and Charles Bordet.

For his post-secondary education, Jules Bordet attended the Free University of Brussels. He later graduated from this school in 1892 with a medical doctorate degree.

After earning his doctorate degree, Jules Bordet began working at the Pasteur Institute. One of the main aspects of his job was research. Above all else, Bordet spent most of his time studying various types of bacteria. Doing this helped him to make several important discoveries. One of these discoveries was that of phagocytosis within white blood cells.

Jules Bordet continued to study the way that bacteria interacted within blood for several years. Some of his studies even introduced an entirely new subject in science called serology, which is the study of blood serum and how it reacts to being introduced to new objects, like bacteria and other pathogens.

One of Jules Bordet’s biggest discoveries were made in 1895. It was in this year that he discovered that one reason why bacterial cells ruptured was that of a heat-stable element (which is in all animals) and a heat stable antibody (found only in animals who were immune to the bacteria present). These two things interacted to rupture the bacterial cell walls.

As the 1890’s went n, Jules Bordet continued to study bacteria and blood. In 1898, Jules Bordet discovered that blood transfusions between two different species of animals doesn’t work out well because when this transfer is made, the red blood cells in the foreign blood become damaged because of hemolysis. Hemolysis is a type of destruction, mostly by rupturing, of red blood cells. This can sometimes be caused by bacteria.

In 1900, Jules Bordet moved to Brussels. There, he helped to found another Pasteur Institute. While here, he worked with Octave Gengou on several projects. Their main topic of study was bacteria, and how a person could build up their immunity to certain types of harmful bacteria.

One of the major things that Jules Bordet and Gengou made was the complement-fixation test. This test would check for harmful bacteria in the blood. If this test found harmful bacteria, then doctors and scientists could tell what kind of illness a person had. This was especially helpful for diagnoses diseases like typhoid and syphilis. This test is still used today.

In 1906, Jules Bordet and Gengou made another important discovery. Bordet was able to identify and isolate the bacteria that was the main agent in contracting whooping cough. This bacteria was later called bacterium Bordetella, named after Bordet himself. The two were later able to make a vaccine for the disease because of their discovery.

In 1907, Jules Bordet began working at the Universite Libre de Bruxelles. Here, he worked as the professor of Bacteriology. While here, he continued his research and wrote several books on the topic of bacteria. He was also later made a member of the administrative council of this school. He worked here until 1935.

Later in life, Jules Bordet began to study bacteriophage, which is a type of virus that can kill bacteria. He wrote several papers on this subject.

Jules Bordet retired from the Pasteur Institute in Brussels. His son, Paul Bordet, then became the director of the Institute.

All of Bordet’s books and other publications are scientific works. Some of his most famous works are listed below.

Nobel Prize in Physiology or Medicine (1919)

Jules Bordet married Mathe Levz in 1899. Together, the couple had three children.