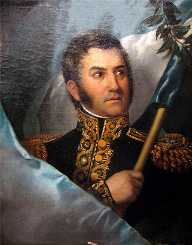 A tyrant and autocrat by nature, Juan Manual came to rule Argentina with his dictatorial roles. He acted as the head of Argentine Confederation and Buenos Aires Province. Although he was previously known as the Law Maker, Juan employed uncharitable and harsh personality in between his leadership. Aside from anything else, he didn’t advocate any criticism. It was during his tenure that peaceful elections turned into an absurd and corrupt Federation. Death penalties and scaffolds were introduced just to make sure that everything was in order. Although he wanted to get rid of everything that tackled his intellectual, Juan loved his country to the core. In short, Juan believed that Argentina wasn’t yet ready for democracy due to illiteracy. Let’s see whether he managed to lead the Argentinians as he desired.

On 30th, March 1793 a couple, Leon Ortiz de Rosas and Agustina Lopez de Osornio were blessed with their first born son in Buenos Aires, Argentina. He was none other than Juan Manuel de Rosas who loved to spend time with his twelve younger siblings. Juan’s protective father served as a military officer while his maternal mother came from a well-to-do family.

At first, Juan got immense love and support from his mother where she took the time to educate him while still at home. At eight years of age, he was taken at a local private school. Although he didn’t seem to love education, he took an early interest in a political system called French absolutism.

During the 1800s British Invasion, Juan Manual was thirteen years of age when he opted to act as a distributor of detonated weapons. Early in 1811, Manuel started to act as a leader in his way. It was here that he took over as the leading man of his father’s ranch. After two years, he tied a nuptial knot with Encarnacion Ezcurra. Above all, his family opposed his early marriage where he opted to start his own life by establishing a business.


Juan As A Proprietor

In his way,  Juan Manuel de Rosas first established himself as a businessman when he introduced a meat salting plant named Los Cerrillos. What led to his early achievement was none other than his good management’s skills. He then started to purchase several lands, and soon he turned into a landowner without breaking the law.

It is believed that in 1820 Juan joined the Unitarian army of Buenos Aires where he acted as the 5th, Regiment of Militia. They were also referred to us as Colorado’s Del Monte due to their red regalia. All thanks to them that Argentina turned into a peaceful and harmonious country. His incredible work and zeal made him be ranked as the cavalry colonel and what followed next were more lands in his name. This paved the way for more pseudonyms including a political leader or caudillo. In the same manner, Juan had already acquired over 500,000 acres of land by 1830.

Affluence and fame started to follow  Juan Manuel de Rosas like a plague. It was here that he opted to team up with the Federal Party that stood with him during his political ideals. In 1827 he opted to inaugurate a riot at the Unitarian government. He aimed to make the higher authorities to eliminate their unpredictable policies.

Still in 1827 Rosas appointed Manuel Dorrego as the acting governor of Buenos Aires. At the time he got a seat as the General Commander of the rural militia. This paved the way for more fame and popularity. After Dorrego killings in 1828 by the Unitarian coup, Rosas opted to act as the second governor. In 1829 he was appointed as the elected governor by Buenos Aires House of Representatives.

Juan’s next move was to embrace peace and eradicate chaos that overruled his land. As a result, he found himself solving different problems including a collection of revenue and reduction of immense expenditure. His extra fame and power gave him a chance to silence anyone who went against his wish, including the press.

At the latter of the civil war in 1831, Juan’s work was applauded. However, several Federal leaders started to demand a new constitution. It was here that Rosas started to give up on his political deals where he terminated his term on 5th, December 1832.

After two to three years Juan was reinstated back to his previous position. Here, he came up with his own rules and regulations-The One Part theme. He practiced a well-accorded rule where his ministers were treated like subordinate staffs. He treated his supporters with high ranked positions while oppressing his opponents. In other words, I won’t argue to say that he embraced terrorism at its best. Sources say that tons of peoples lost their lives from 1829 to 1852.For safety; lots of Argentineans fled their native land. In the same demeanor, Rosas started to call himself as an All-time man, the only protector of his nation.

The Rise Of Dictatorship

Instead of setting free the people of Argentina, Juan’s caudillo’s manner became the order of the day. In 1839, the former governor called Juan Lavelle came back after spending years in exile. It was here that Lavelle formed a close tie with five provinces where they planned to attack Buenos Aries. Luckily The British won the battle where Lavelle breathed his last in 1842.

After some time, Argentina became part and parcel of Juan. He began to call himself as the leading demagogue and the Supreme Head of Confederacy. In 1843 Juan planned to invade Uruguay where he took over a huge land. Although fame came to rule his life, resentment and fear started to rule his life. It was here that one of his loyal lieutenants, Jose de Urquiza began to go against his orders. He aimed to eliminate him from the seat.

After some time, Justo Jose, Uruguay, and Brazil formed a coalition. This paved the way for a Platine War in 1852 where Argentinian army accepted defeat together with Juan Manual de Rosas. He was left with nothing than to flee silently to England. Juan went to spend the rest of his life on his ranch as a farmer. His entire lands and properties were destroyed.

On 16th, March 1813  Juan Manuel de Rosas tied a nuptial knot with Encarnacion Ezcurra. The couple was blessed with a son called Juan Bautista and a daughter called Manuela. It was in England that Juan turned into a hardworking farmer where he lived a decent life. He breathed his last on 14th, March 1877 due to pneumonia where he was interred in Southampton. Even before death came to close his eyes, Argentinians came to hate him to the core. But the introduction of Revolutions movements tried to reinstate his fame without success. It was in the 1980s that his image improved where a railway station was named after him.