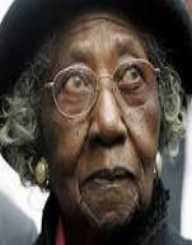 Johnnie Carr was born on January 26, 1911. She was an American Activist. She was a United States Civil Rights Movement leader. Johnnie died at the age of Ninety Seven years.

Johnnie Carr was born Johnnie Rebecca Daniels Carr on January 26, 1911, in Montgomery, Alabama. She was born to John Daniels and Annie Daniels. She joined Montgomery Industrial School for Girls which was African American private school for girls. In 1927, she left the school due to its closure.

In the 1930s, Johnnie Carr took an interest in politics and later became politically active. In 1931, in her activism spirit, she paid for a legal counsel to represent the Nine African American defendants who were falsely accused of rape. She also became National Association for the Advancement of Colored People’s member.

In 1940, she became the secretary as well as the youth director of the Montgomery chapter of the National Association for the Advancement of Colored People. In 1944, she alongside her husband Arlam Carr, E.D. Nixon, E. G. Jackson, Raymond Parks, Irene West, and Rosa Parks chose to stand in defense of a black woman who was gang-raped by six white men.

In 1955, Johnnie Carr participated in the public buses boycott after the arrest of her childhood friend Rosa Parks for refusing to give a seat to a white man. The following year, the boycott ended after a Supreme Court’s decision of the Montgomery public transportation system desegregation. In 1964, she filed a lawsuit alongside her husband against the Montgomery County Board of Education and demanded desegregation in Montgomery Schools.

Three years later, she became the Montgomery Improvement Association’s president a post she held until she met her death. In 1969, she won the case against Montgomery County Board of Education, and her desegregation idea had to be put in action in the Schools.

In 1972, Johnnie Carr married Jack Jordan with whom she had two children. They later divorced. In 1944, she married Arlam Carr with whom she had one child. She died of a stroke on February 22, 2008, in Montgomery, Alabama. Johnnie died at the age of Ninety Seven years.