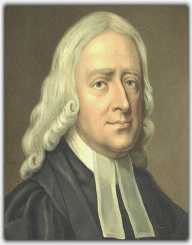 John Wesley was an English theologian and an Anglican cleric. Born on June 17, 1703, John Wesley along with fellow cleric George Whitefield and his brother Charles Wesley founded Methodism. John Wesley was ordained as a priest in 1728 two years after being elected a fellow of Lincoln College, Oxford. John Wesley became the leader of the Holy Club formed by his brother Charles Wesley with the aim of studying and pursuing a devoted Christian life and had Whitefield as a member.

John Wesley had what came to be his evangelical conversion on May 24, 1738, as John Wesley noted his "heart strangely warmed" and since then began his own ministry. While Whitefield embraced Calvinism, John Wesley took on the Arminian doctrines, which at the time dominated the Church of England. He took on to preaching on social issues, including the abolition of slavery and prison reforms. John Wesley was against Calvinism and the doctrine of predestination and favored Christian perfection. John Wesley believed that Christians could attain a stage that the love of God "reigned supreme in their hearts" to enable them to attain outward holiness.


John Wesley was born on June 17, 1703, in Epworth, Lincolnshire, England? to Samuel Wesley and Susanna Wesley. He was the fifteenth child of his parents. The children received early education and learned Latin and Greek and portions of the New Testaments. To test their proficiency, Susanna examined each of her children before midday meal and evening prayers. At age five, the Wesley family house was raised by fire, and all the children were rescued except for John Wesley who was stuck on the upper floor. With the house almost burnt down, a parishioner standing on another man’s shoulders rescued him through the window. This miraculous incident would serve as an inspiration for Wesley’s life.

John Wesley attended the Charterhouse School in London at age 11 in 1714. While there, John Wesley replicated the upbringing he had at home. Afterward, John Wesley enrolled at the Christ Church, Oxford in1720 and graduated with a Bachelor of Arts in 1724. On September 25, 1725, John Wesley was ordained a deacon, which was a holy order necessary to undergo before becoming a fellow and tutor at the University. With his great passion for seeking for the religious truth that caused the revival of the 18th century, John Wesley began to read Jeremy Taylor and Thomas a Kempis just a year after his ordination.

John Wesley also read Christian Perfection and A Serious Call to a Devout and Holy Life by William Law, which, according to him gave him an inspiring view of the law of God; which John Wesley was committed to keeping sacredly inwardly and outwardly believing that with obedience he could find salvation. This motivated him to live and discharge his religious duties meticulously, studied the scriptures and deprived himself of many things, seeking holiness of heart and life

After being ordained as a deacon, John Wesley was elected as a fellow of Lincoln College, Oxford and continued his studies. He taught Greek, moderate daily disputation and the New Testament. In Augut1727, John Wesley had his masters and returned to Epworth at the request of his father. Just a year after, he was ordained a priest and served as a parish curate the next two years. In November 1729, John Wesley received a request from Rector the Lincoln College asking for his return, which he did to maintain his status as a junior fellow.

Wesley’s younger brother, Charles Wesley also matriculated from the Christ Church and with two others; formed a club aimed at studying and pursuing a devoted Christian life. After Wesley returned from Lincoln, John Wesley took over the leadership of the group, and that saw an increase in membership and commitment. Meeting on a daily basis, they pray, read psalms and the Greek New Testament. They gave Communion every Sunday as compared to the church’s three times in a year. As observed by the ancient church, members of the Holy Club fasted Wednesdays and Fridays until three o’clock. They expanded their services by visiting prisoners, relieved jailed debtors if possible and cared for the sick. Members were soon tagged as being religious fanatics, and that gave them the name, Holy Club. A pamphlet by an anonymous author in 1733 referred Wesley and the group as "The Oxford Methodists."

Upon the request of James Oglethorpe, John Wesley and Charles left for Savannah in the Province of Georgia aboard The Simmonds on October 14, 1735. Oglethorpe, who had founded a colony on behalf of the Trustees for the Establishment of the Colony of Georgia in America wanted John Wesley to minister a new Savannah parish. It was during this time that John Wesley had an encounter with Moravian settlers and was enthused with their spirituality and deep faith enshrined in pietism. This would influence John Wesley in his theology and Methodism. Reaching Georgia, he saw it as an opportunity to revive “primitive Christianity in a primitive environment.” Serving as a priest in the Savannah parish, saw an increase in attendance and Communion.

His service there was, however, seen as a disappointment as compared to being the leader of the Holy Club. Things even became worse when he fell in love with a woman called Sophia Hopkey. His relationship with her went into jeopardy when Sophia married William Williamson. At a point, John Wesley denied her Communion after she failed to signal him in advance. This resulted in legal proceedings and causing John Wesley to flee and returned to England in December 1737.

Leaving Georgia on a bad note, John Wesley returned to England depressed and sought solace with the Moravians. On May 24, 1738, at a Moravian meeting in Aldersgate Street, London, John Wesley had what came to be the “Aldersgate experience.” This was after hearing a reading of Martin Luther’s preface to the Epistle to the Romans.

John Wesley quoted his experience as "In the evening I went very unwillingly to a society in Aldersgate Street, where one was reading Luther's Preface to the Epistle to the Romans. About a quarter before nine, while John Wesley was describing the change which God works in the heart through faith in Christ, I felt my heart strangely warmed. I felt I did trust in Christ, Christ alone for salvation, and an assurance was given me that he had taken away my sins, even mine, and saved me from the law of sin and death." This encounter rekindled him and started to preach on his salvation by faith. At this moment, he drew closer to the Moravian Society in Fetter Lane. John Wesley traveled to the Moravian headquarters in Germany, Hernhut, for studies in 1738. After his return to England, he published a collection of the hymn for the Fetter Lane Society.

John Wesley adopted George Whitefield method of giving a sermon in the open air and did so whenever the opportunity arrives. His first time was in April 1739, upon an invitation from Whitefield, near Bristol. John Wesley also summoned in the churches upon invitation. In 1739, John Wesley broke from the Moravians and started the Methodist Society in England. Soon after the formation, they were persecuted by the clergy and magistrates on various counts some of which include flouting regulations of the Church of England on issues of parish boundaries and who had the right to preach. There were several attacks, including mob attacks and the use of print and sermons by the clergy.

Nonetheless, John Wesley along with his followers continued to seek the welfare of the needy and neglected and advocated against slavery. John Wesley died on May 2, 1791, at age 87. Laying on his dying bed, he uttered the words, "The best of all is, God, is with us." He was buried in his chapel on City Road, London.