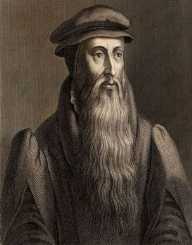 John Knox was born c. 1513, in Giffordgate, Haddington, in Scotland. Knox's father was a merchant, and his mother died when he was very young. He also had an older brother who helped their father with his business.

During the years of Knox's study, academic students only had the priesthood open to them. Other career paths were agricultural or mercantile.

In 1536, the Catholic church ordained Knox as a priest. He served in the diocese of St. Andrews until 1543.

At some point, Knox converted to a Protestant. George Wishart traveled through Scotland preaching in support of the reform. He left Scotland in 1538 to escape punishment as a heretic.

Knox was one of Wishart's closest friends. Wishart was arrested in December 1545, and he was burned at the stake three months later.

Cardinal David Beaton was the person who sentenced Wishart. He also continued to hunt for Knox. In May 1546, Wishart supporters murdered Beaton as revenge and seized his castle as their stronghold.

Henry II's troops stormed the castle in June 1547, and they took control. They took everyone captive, including Knox. The guards chained the prisoners to benches in French galleys and they had to row to France.

The French released Knox in February 1549. He had been on the galley for over a year and a half. Knox stayed in England, and in April 1549, he received his license to work in the Church of England.

Knox recognized the amount of work to be done to bring reform to the church. He used the Book of Common Prayer, but he adapted it to reform ideas. His congregation quickly grew.

The King died in 1553, and Mary Tudor succeeded him to the throne. She re-established Roman Catholicism throughout England.

England was no longer safe for Protestant preachers, so Knox sailed for Europe in January 1554.

Knox landed in France, and he continued his journey to Geneva. John Calvin had established himself in Geneva, and Knox came under his authority.

Knox received a request to return to Scotland, which he did. Upon arriving in August, he was surprised at how much the country had changed. Before long, he had a lot of support from the local nobility.

He decided to return to Geneva and resume his ministerial position, and he arrived back to Geneva in September 1556.

Knox settled into a busy lifestyle over the next two years.

Meanwhile, in England, a Protestant had returned to the throne. As a result, refugees prepared to go home. Knox arrived back in Scotland in May 1559.

The authorities declared Knox, an outlaw once he arrived back in Scotland. The Protestants traveled to Perth where they could defend themselves if necessary.

Mary of Guise, the Queen Regent, sent Lord Moray and the Earl of Argyll to Perth. She used them as her delegates to offer terms, including not to deploy French troops. However, when she entered Perth, she took control by using soldiers paid by the French.

Lord Moray and Lord Argyll saw this as betrayal, and they immediately switched their allegiance to Knox.

Protestant anger continued to grow, and riots were breaking out around the country. Although the Queen Regent offered freedom of conscious, Knox knew she was lying and would seek backup from France.

Knox tried to garner support from the English, but the Queen Regent found out. In October 1559, the rebels removed her from the regency.

The revolution was complete when Mary of Guise died in June 1560. The authorities signed The Treaty of Edinburgh. As part of this, the French and English troops withdrew from Scotland.

The Scottish Parliament convened on 1st August. They called Knox, along with five other ministers, and asked them to create a new confession of faith. Knox and his brethren presented the document four days later. The parliament voted on it and then approved it.

Knox and his co-ministers then worked on the Book of Discipline. It took several months to complete and was the foundation for the new church.

Knox established the Presbyterian denomination. The church has millions of members worldwide.

Knox married Margery Bowes, who died in 1560. They had two sons together.

He married his second wife, Margaret Stewart, in 1564. The couple had three daughters.