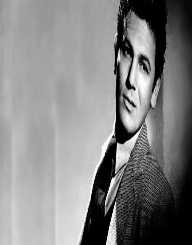 John Garfield was an actor with notable films in the 1940s. Though his life was short, he still made a name for himself in theater and movies.

John Garfield was born on March 4, 1913, in New York City. His name at birth was Jacob Julius Garfinkle. His parents David and Hannah were Jewish immigrants from what is now Ukraine. The family struggled financially. David was a clothes presser as well as a part-time cantor in the synagogue.

At the age of seven, John Garfield lost his mother when she died. John Garfield and his brother had to live with relatives who could take care of them. Their financial situation did not improve. At the same time, John Garfield was not doing well in school. If he attended classes, he did not perform well. His time away from school was when he was involved in street gangs. Over time he became a gang leader and a boxer.

John Garfield's father finally had enough of his son's misbehavior, so he sent him to a school for problem children.

It was there that his acting talent was discovered. His principal and teacher helped him with his stuttering problem and provide him with acting lessons. John Garfield began acting at the American Laboratory Theater and the Civic Repertory Theater.

John Garfield got his start on Broadway in “Lost Boy.” His role in “Counsellor-at-Law.” He gained the attention of Warner Bros., but he did not accept their request for a screen test. Instead, he tried out for the new theater team called “The Group.” During his apprentice year, the critics were very positive about his role in “Awake and Sing” in 1935. Clifford Odets was proud of having Garfield in The Group and was said to be writing a play just for John Garfield

However, the lead role for the play “Golden Boy” was given to another actor. It was at that point that Garfield chose to pursue his career in Hollywood.

John Garfield started using his stage name of John Garfield by this time. He went to Warner Bros. and made sure that he could still have time off for stage work while under contract. He and the studio agreed to a seven-year contract. His first supporting role was in the movie Four Daughters in 1938. He earned his first Oscar nomination for his role. Other movies he starred in included They Made Me a Criminal and Blackwell's Island. Conflict arose when John Garfield disagreed with the studio's decision to cast him in mainstream melodramas. The reason was that he had more confidence in his ability to tackle challenging roles.

John Garfield refused roles, and in return, the studio did not pay him. He also tried to enlist in the military when World War II broke out. His heart condition kept him from serving. Instead, he entertained the troops overseas and showed his support through patriotic films during the war era. He started in Air Force, Destination Tokyo, and Pride of the Marines. When his contract ended with Warner Bros., John Garfield returned to the theater where he got his start. He starred in “Skipper Next to God” in 1948 and the revival of “Golden Boy” in 1952.

John Garfield was involved with liberal politics. It was also the time of McCarthyism. He was blacklisted from Hollywood because he would not participate in naming those who were a part of Un-American Activities.

John Garfield married Roberta Seidman in 1935. The couple had three children. He separated from his wife in 1952 after the stress of being blacklisted.

When John Garfield was young, he contracted scarlet fever. It was not diagnosed until he was an adult. One of the results of the undetected illness was that it weakened his heart. It was one of the reasons why he had a heart attack at such an early age.

During the Second World War, John Garfield would entertain the troops abroad.