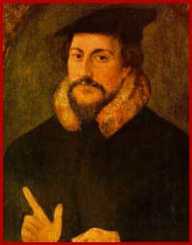 John Calvin was a prominent French theologian, pastor, and a reformer. Born on July 10, 1509, he was a key figure of the second generation of the Protestant Reformation and key in developing the Christian theology, which became Calvinism. Calvin who was a member of the Roman Catholic Church left the church in the 1530s. He contributed much to most books of the Bible, confessional documents and other theological treatises. Calvin worked in diverse ways to bring reformers together and instituted measures that could bring reformers under one umbrella.

Calvin was best known for his reform works in Geneva and published works like a commentary on Seneca’sDe Clementia,La Forme des Prières et Chants Ecclésiastiques andCatéchisme de l'Eglise de Genève among others. At a point in his reformation career, he encountered fierce rivalry from some politicians and the wealthy in the society who became what is known as the libertarians that nearly led to his resignation from the Geneva church. However, this was resolved as Geneva became the centre of Protestantism.

Jehan Cauvin was born on July 10, 1509, at Noyon in Picardy in the Kingdom of France to Jeanne Le Franc and Gerard Cauvin. Calvin was the first child of his parents after four of their previous children died in infancy and had other four siblings. His mother died when he was young. As an intelligent chap, Calvin was employed by a bishop as his clerk at age 12, which he had to cut his hair as a symbol of his dedication to the church.  With the support of an influential family, the Montmors, he was educated at the College de la Marche, Paris. While there he learned Latin under the tutelage of Mathurin Cordier. After his education there, he continued at the College de Montiagu to study philosophy and to be trained as a priest. He later enrolled at the University of Orleans where he studied law after his father had redrawn him from the Collège de Montaigu in 1525.

In1529, Calvin enrolled at the University of Bourges where he studied for about 18-month including learning Koine Greek for his New Testament studies. He received his licentiate in law in 1532 and came out with his debut book, a commentary on De Clementia by Seneca. Calvin is said to have experienced his religious conversion in autumn 1533. In October same year, he returned to Paris from an unsuccessful trip to Orleans and Noyon. However, he later went into hiding after some attacks on reformers which made his friend Nicholas Cop leave for Basel. Calvin also left France for Basel to join Cop during the Affair of the Placards in mid-October 1534. This came about when faceless reformers criticised the Roman Catholic mass through posting placards, and this resulted in an attack from some Roman Catholic Church devotees on sympathizers of the reformers.

While there, he published a maiden edition of Institutio Christianae Religionis in 1536. The book served as his defense as a Reformer and also an instructional book for people interested in the Christian faith. After the publication, he left Basel for Ferrara, Italy where worked as a secretary to Princess Renee of France. He returned to briefly to France and later decided to leave for Strasbourg, which was a free imperial city of the Holy Roman Empire and accommodative to reformers. However, he was had to make a detour to Geneva because of military maneuvers of the imperial and French forces.

While there, he was convinced by another reformer William Farel to stay, a decision he accepted unwillingly. He was to assist Farel in reforming the church there, which he regarded as a pious work. Though it is not known the specific task he was assigned to, he was later referred to as a reader and later made a pastor even though he hadn’t received a pastoral consecration. While Faral drafted a confession of faith, Calvin also worked on articles on reorganizing the church in 1536. Both came out with the Articles concerning organization de l'égliseet du culte à Genève, which they presented to the city council on January 16, 1537. The relationship between them and the council went bad making them leave for Basal.

Calvin later received an invitation from Martin Bucer and Wolfgang Capito to lead a church of French refugees in Strasbourg. He took the position in September 1538 and later applied for a citizenship of the city, which he was granted. It was during this time that he came out with the second edition of the Insitutes in 1539 and the Commentary on Romans published in March 1540.

Although Calvin had some discontent with the Geneva council on his first work there, his services again became needed by Geneva as the church kept dwindling and the need for someone to rekindle it. After some deliberation, the church in Strasbourg agreed to release Calvin to serve in Geneva for six months. Calvin left for Geneva in 1541 and requested for reforms which led to the passage of the Ordonmancesexxesiatiques (Ecclesiastical Ordinances) on 20 November 1541. This ordinance set the orders of ministerial functions which included pastors to teach and administer sacraments, doctors to instruct believers in the faith, elders to provide discipline and the deacons to be in charge of caring for the poor and needy.

In addition, they proposed an establishment of an ecclesiastical court that consists of lay elders and ministers. As part of his reforms, he introduced the use of songs to support scripture readings in 1542, published La Forme des Prières et Chants Ecclésiastiques (The Form of Prayers and Church Hymns) and also adapted a service book used in Strasbourg. He published Catéchisme de l'Eglise de Genève (Catechism of the Church of Geneva) in 1542, taking inspiration for Kurze Schrifftliche Erklärung by Bucer in 1534. During his days in Geneva, he initially preached twice on Sunday and three times within a week. These schedules later became burdensome and had to preach once on Sunday. He, however, reverted to twice on Sunday’s in 1549 with his sermons lasting over an hour without using notes.

Calvin had a fierce rival among which included the wealthy and political powerful class. These sects known as the libertarians grew powerful by day from 1546 and by February 1552 which almost forced Calvin to resign on 24 July 1553. This situation and opponents were overcome in 1555 as Geneva became a center for Protestantism. Calvin since then became in internationally figure as a reformer and game lots of fame. Calvin was a disciplinarian and was used to punishing oppositions with execution.

John Calvin during his initial never sought to marry even though his friends urged him to do so. His marriage was once fixed with a woman from a noble family, but although all arrangements were made, the planned marriage that was set for March 1540 never took place. He rather got married to Idelette de Bure, a widow with two children in August same year. The couple had surviving children as their only child Jacques died a few days after his birth. Idelette died on March 29, 1549. Calvin also died on May 27, 1564, aged 54 after he burst a blood-vessel resulting in a decline of his health and subsequent death.