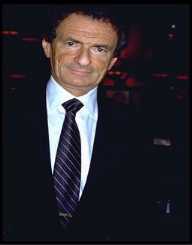 Jerzy Kosinski was born on June 14, 1933, in Lodz, Poland. He adapted the name Jerzy Kosinski during World War II, to escape the Nazi persecution. He and his family lived in central Poland and survived the occupation of the country thanks to a Catholic priest. Kosinski and his family attended a Catholic church, where he served as an altar boy. His family was Jewish, but the priest gave them baptismal certificates, which allowed them to pose as Catholics.

After the end of World War II, he and his family moved to Jelenia Gora. There, Kosinski began his education and later went to the University of Lodz. Kosinski graduated in 1955, with two degrees in History and Sociology.

After graduating from the University of Lodz, Jerzy Kosinski was enlisted in the Polish army and served as a sharpshooter. In the meantime, he also was teaching at the Polish Academy of Sciences and served as an associate professor.

A major turning point in his life came in 1957 when Kosinski left Poland for the United States. He had to create a fake foundation in Poland, and promise that he would return, which was a requirement at the time. To play out his plan, Kosinski had to forge several documents, including letters from Communist officials.

When Jerzy Kosinski arrived in the United States, he was struggling with finances. Kosinski lived in humble circumstances and worked several different jobs, including driving delivery trucks, to support himself. Although he was overqualified for his jobs, Kosinski had to work to put himself through college in the U.S. After residing seven years in the country, Kosinski was granted American citizenship (1965). Just shortly after, he graduated from the prestigious Columbia University.

Kosinski began his career as a novelist in 1965, publishing his book The Painted Bird. The book was an autobiographical account of his experiences hiding from Nazis and Polish authorities. The book also included stories of the main character being abused, which raised concerns from the communist government of Poland. Kosinski was accused of being anti-Polish. His book was banned in Poland in 1968 and remained so until the fall of Communism in the country. The book received some criticism but was praised by the noted author and holocaust survivor Ellie Wiesel. Many other claimed that the book was a work of fiction and only used the holocaust to profit. There were also claims that his book was plagiarized.

After the release of his first book, Jerzy Kosinski continued writing. In 1968, he released his second novel Steps. The book was considered to be the pinnacle of surrealist fiction and received the U.S. National Book Award for Fiction. Kosinski published his third book Being There in 1971. This work was a political satire on the role of media in America and is still considered to be his most significant work.

Between 1975 to 1988, Kosinski published six more novels. These works are The Devil Tree, Cockpit, Blind Date, Passion Play, Pinball and The Hermit of 69th St. In 1967, Kosinski was awarded a grant from the Guggenheim Fellowship. Later that year, he also won the Ford Foundation grant. In 1970, Kosinski received the Award for Literature from American Academy of Arts and Letters.

In 1962, Jerzy Kosinski married Mary Hayward, an American steel heiress. Their marriage lasted only for four years. Shortly after the divorce, Mary died of cancer, and Kosinski was left out of her will. After the death of his first wife, Kosinski married with Katherine Von Fraunhofer, who was a member of the Bavarian nobility.

Kosinski’s novels sold more than 70 million copies worldwide and had been translated into 30 languages. He has been featured on the New York Times Best Seller list several times. Kosinski tragically ended his life in 1991. His death resulted in an overdose of drugs and alcohol.