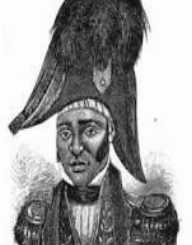 Jean-Jacques Dessalines is a Haitian national symbol. Also, he was the revolutionary first local leader (emperor). In his time he created Haiti's first constitution. Dessalines was born in 1758 in the French Colony of Saint-Domingue or Africa. Although Dessalines was a slave in most of his life, he overtook the challenge and became one of the greatest men in history. He served in the colonizers military in 1791 as lieutenant under the command of Toussaint L’Ouverture. Thereby, he was the one, with the help of his military forces that took back Haiti.

After taking power, he gave the colony its new name Haiti. Therefore, he went ahead to declare that Haiti was an independent state in 1805. In his lifetime he took it upon himself to abolish slavery making Haiti the first country to attain independence. Also, Haiti was the first nation to use slaves to kick out their oppressors.

Therefore, at the end of the revolution, Dessalines declared himself a lifetime ruler of Haiti. Also, he made himself president of the nation. Moreover, his general also declared him the emperor of Haiti. In the year 1806 on November 17th, Dessalines met his death in Pont Rouge, in Port-au-Prince, Haiti.

The Mystery of Dessalines

Jean-Jacques Dessalines is one of the greatest pillars of Haitian history. However,  his early childhood eludes most. Throughout time, his early life has never been clear to historians. This is because there are many accounts of where he was born. Also, there is no clear account of how he became a slave in Haiti. Some believe that Jean-Jacques Dessalines’ was born in West Africa and transported to Saint-Domingue as a slave.

The quest for freedom in Saint-Domingue was an inevitable situation. There was a build of tension on the island over time. The slaves were waiting for the right opportunity to revolt. So, in the year 1791, Dessalines took the opportunity ran away when the rebellion took place. The leader of the uprising was Toussaint L’Ouverture. At, the time of the struggle, Dessalines was illiterate. However, Dessalines was also a quick study, and within a short, he was appointed a lieutenant.

Some of his colleagues gave him the nickname, The Tiger. This was because Dessalines was a vicious soldier in combat. Also, during the beginning of the rebellion, the rebels had one thought in mind. All the slaves were to be released no question asked. However, as the wave of resistance grew throughout Saint-Domingue, there was a demand for liberation and independence. They fought for their freedom for some years. Through that time, Dessalines skills, knowledge and wisdom grew. Also, he got to be a better leader and rose among the ranks quickly.

Therefore, his commanding officers noticed his vital role in the war against the French and Spanish oppressors. So, by the year 1799, Dessalines got to be ranked as a brigadier general among the rebels. Soon after, the rebellion got out of hand and became a full-blown civil war. Moreover, the Europeans were busy trying to defend against Napoleon. In time alongside his commanding officer, Dessalines got to serve as the deputy governor-general of Haiti. The whites did not take well to losing their slaves and control of the island. So, they asked their government, (France) to take control of the island. Thus, troops got sent from France. Dessalines alongside his commander L’Ouverture got into action and drove the French back. (Crête-à-Pierrot)

After winning the battle, Dessalines became a turncoat and joined the French’s ranks. Therefore, this leads to the capture of his old boss L’Ouverture’ in the year 1802. However, upon realizing that the French wanted to bring back slavery, Dessalines left their camp and went back to his old friends. Together with his battalion of rebels, he swept the French out of the island back to the sea. In the year 1805, Dessalines proclaimed independence in Haiti.

After taking the reins of power, Dessalines made sure that his effort to make Haiti independent state were not in vain. Therefore, he made the introduction of forced labor among the people. A move that was not welcomed by many residents of the island. Dessalines gave the reason that he did not want the economy of Haiti to flop. This would have given the whites an opportunity to come back. Also, he took up a drastic measure to eliminate all the whites who were presents in the island. So, together with his forces, he killed women and children and all white men.

Dessalines move to introduce forced labor did not sit well with most in the island. Moreover, most of his policies were more of oppressive than progressive. Therefore, most of the population felt like they still living in slavery. The only thing was the masters had changed from a white man to a black man. The very reason that led to the death of Dessalines is still unlear to date, but most of the theories point to foul play. However. Some suggest that Alexandre Pétion and Henri Christophe ambushed and killed him. Moreover, the two later split the country into two. They had decided to rule the section of the country separately.