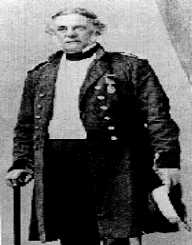 James Douglas was born on 15th August 1803, in Demerara (now Guyana). His father John Douglas was a Scottish merchant and planter who hailed from Glasgow, and his mother Martha Ann Telfer was a free colored. Martha was a Creole with European and  African ancestry, from Barbados. Although his parents were not married, James had a brother and a sister. John later married Jessie Hamilton in Glasgow in 1819 and had more children.

James Douglas was sent to Lanark, Scotland to study in a preparatory school during 1812; he might have extended his studies at Manchester, England from a French Huguenot tutor. James was fluent in French from the exchange.

After school, both James Douglas and older brother Alexander were apprenticed to the North West Company. James Douglas was only sixteen years old when he sailed to Quebec in 1819. James then traveled to Fort William.

In Fort William, James Douglas worked as a clerk, doing accounting works as well as learning business acumen and the Indian character. Transferring to  Île-à-la-Crosse in the summer of 1820, James soon learns military tactics when dealing with competitor The Hudson’s Bay Company (HBC). He and his other colleagues were explicitly ordered to stop harassing HBC when both companies merged a year later. James Douglas continued to learn in his own time via the books from Britain, and he had managed to have a cordial relationship with the First Nation natives, particularly those who were neither Inuit or Métis. After the merger in 1821, James was employed as a second class clerk for his skill as an Indian trader. By 1825, James Douglas managed to rise through the ranks to take charge of the Fort Dark (now Alberta) red trading post. He has then moved to Fort St. James on Stuart Lake, before moving on to establishing Fort Connolly on Bear Lake.

William Connolly was the manager of Fort Connolly, and he viewed James favorably for his skills and charm. But after James killed a native for murdering HBC traders, he was sent to Fort Vancouver. James Douglas spent nineteen years as Chief Accountant in Fort Vancouver. Finally, he was promoted to Chief Trader for Columbia District in 1834. Six years later he was the highest rank for field service in the company, serving as Chief Factor.

James Douglas received permission to set up a post in Yerba Buena (now San Francisco), California, and founded Fort Victoria. In 1846, the British North America/ United States Border was extended in the Oregon Treaty. James moved HBC headquarters from Fort Vancouver to Fort Victoria in 1849, after the got the lease of Vancouver Island with the condition to create a colony.

Initially, the British Government appointed Richard Blanshard as the governor of the Vancouver Island colony. James Douglas had practical authority as the Chief Factor for HBC, as he was the colony’s primary employer. After he had driven Richard Blanshard efficiently to resign in 1951, the job went to James Douglas. James Douglas then created Victoria Voltigeurs, a private army of Vancouver Island, to stop America’s expansion pressures. Aside from the military, James moved to create schools, church, and rationed alcohol.

James Douglas then established Legislative Assembly. In 1854, the British government commission James to build a hospital at Esquimalt Harbor so that they could send casualties from the Crimean war to be treated there.

James Douglas also had a request to improve the capacity of its harbor, which became crucial in 1865 as North Pacific Squadron was then headquartered at Vancouver Island. When gold was discovered in 1856, James Douglas stationed a warship around Fraser River and issued licenses to miners and merchants, trying to maintain British jurisdiction.

Two years later, James Douglas was appointed as a Governor of the newly formed Colony of British Columbia, and he maintained as Governor of Vancouver Island. As a result, James resigned from the Hudson’s Bay Company. After twelve years in office, James Douglas was prepared to step down; he started his journey home after meeting his successor Frederick Seymour on 14 May 1864.

James Douglas married William Connolly’s daughter Amelia on 27 April 1828 via the local custom. Amelia’s mother was of Cree and Métis ancestry. When James was transferred to Fort Vancouver, Amelia stayed behind, joining him after the death of their first child in 1830. The couple had thirteen children in total.  But seven did not survive infancy.

His daughter Cecilia died around 1864 and 65, resulting in him ending his Paris tour prematurely to return home. Sir James Douglas died of a heart attack on 2nd of August 1877, in Victoria. James Douglas was thoroughly honored as his funeral procession was possibly the largest in Victoria and British Columbia

In 1858, James Douglas became Commander of the Order of the Bath and was promoted to Knight Commander on his retirement.

Douglas continued to be active but kept out of politics in all forms. He died in Victoria of a heart attack on August 2, 1877, at the age of 73. His funeral procession was possibly the largest in the history of B.C., and he was interred in the Ross Bay Cemetery.

James Douglas managed to get the British government to build Cariboo road. The road had helped trade and commerce, as well as strengthening British rule with the land.