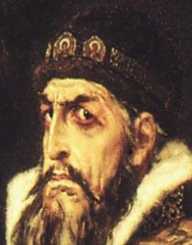 Ivan The Terrible was born on August 25th, in 1530. His birthplace was in Kolomenskoye, Grand Duchy of Moscow. He was the first born son to Vasili III and Elena Glinskaya. Ivan’s father passed away when he was only three years. He died as a result of blood poisoning.

Following the early death of his father, Ivan The Terrible was crowned the Grand Prince of Moscow. However, because he was still young, his mother was in charge. Shortly after, Ivan’s mother passed away as a result of what many would call poison assassination. At the time of her death, Ivan was aged eight.

Ivan The Terrible's coronation was followed by his marriage to Anastasia Romanovna. This was in 1547. Two years after his appointment, Ivan brought together a team of advisers that would help him in instituting his reforms.

Romanovna, Ivan’s first wife passed away in 1560. This significantly affected Ivan’s personal life as he entered into a phase of depression. His behavior changed, and he became temperamental. The mere fact that Ivan The Terrible suspected that his wife had been poisoned only worsened things. Similarly, during this period, the country was faced by trying moments as they failed to win wars against Tatar invasions and the Polish-Lithuanian Commonwealth.

In late 1564, Ivan left Moscow and later threatened to abdicate his throne. However, the Muscovites implored with him to return to his throne. Ivan consented to make his return, but he would have absolute power over surrounding Moscow. After his return, his tenure from this period was a tough one mostly for the boyar families as he executed them. This is the main reason why he earned the nickname ‘Ivan the Terrible.’

Ivan The Terrible was married seven times during his lifetime. Out of his marriages, he had eight children.