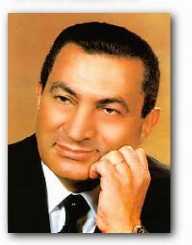 Hosni Mubarak is an Egyptian politician who is best known for his lengthy presidency, which ended when the Arab Spring ousted him in 2011.

Hosni Mubarak was born on 4 May 1928 in Kafr El-Meselha, Egypt. Mubarak’s father was a government official who worked for the Egyptian Department of Justice. Mubarak studied in the Egyptian Military Academy and was awarded a Military Sciences degree upon graduation in 1949. After his graduation, Mubarak joined the Egyptian air force. He became a commissioned pilot the following year.

Mubarak worked as an instructor for the academy and following the Suez Crisis and increased Soviet support for Egypt he trained in the Soviet Union. He taught at the Frunze Military Academy in Moscow. He returned to Egypt to become commander of the Air Force Academy and was part of the build-up in the Egyptian military before the Yom Kippur War.

Egyptian Air Force success around the Suez Canal made Hosni Mubarak a hero. He rose to Commander of the Air Force and Deputy Minister for Defence. Following the Yom Kippur War, Mubarak was given the title Air Chief Marshal. The Egyptian military recovered much of its tarnished reputation in the Yom Kippur War, and this was primarily attributed to the Air Force, and Mubarak claimed the lion’s share of the praise.

Hosni Mubarak was appointed Vice President in 1975 by Anwar Sadat. He took charge of building support for the Israeli-Egyptian peace agreement amongst the other countries in the Middle East. Mubarak was able to gain support from many of the Gulf States and other African Muslim countries. Although supportive of early negotiations between Israel and Egypt, Mubarak ultimately opposed the Camp David Accords.

Mubarak had immense power during his time as Vice President and often ruled in Sadat’s absence. Sadat was assassinated by an anti-peace faction in the Egyptian military in 1981. Mubarak, who was wounded during Sadat’s assassination, succeeded him and became President of Egypt. Mubarak used his presidency to restore Egypt’s reputation in the Arab world; it had been shattered following the Camp David Accords.

In 1989, Egypt was readmitted to the Arab League under Hosni Mubarak. Mubarak had sent aid to Iraq during the Iran-Iraq War but was one of the first to join the American coalition in the Gulf War. The Gulf War proved highly successful for Mubarak and Egypt. The country’s prestige was increased, and over twenty billion dollars of foreign debt was forgiven. Mubarak refused to visit Israel during his time as president, although Egypt continued to have the most cordial relations with Israel of any Arab country.

Egypt’s warm relations with Israel and Mubarak’s suppression of radical Islam made him the target of numerous assassination plots. One attack in 1995 led to Mubarak having 20,000 suspected Islamists detained. Mubarak was against the Iraq War of 2003 but maintained good relations with the U.S in the hopes of achieving a Palestinian State in Israel. Mubarak set Egypt up as the leading broker between the Palestinian and Israeli camps. Following the outbreak of hostilities in 2008 it was Egypt that brokered peace between Hamas and Israel.

Hosni Mubarak faced widespread dissension against his perceived weakness against Israel. There were also widespread allegations of corruption against the Mubarak regime. Egypt continually fell into the bottom half of world transparency charts. Mubarak faced no opposition candidates in his first four presidential elections, 1981, 1987, 1993, 1999. In 2005, Egypt held contested elections, but some opposition leaders were arrested in the run-up to the election which Mubarak won amidst allegations of rigging.

Hosni Mubarak became embroiled in some scandals involving his wealth. Several Western media sources claimed that Mubarak and his family had an estimated wealth in the billions. These were linked to military contracts, and in February 2011 the Swiss government began freezing accounts linked to Mubarak.

Also in 2011, protest against his rule began to spread. Mubarak declared he would not contest the 2011 election. Protests continued until on 10 February 2011 it was announced that Mubarak had resigned. It was the first time that Egypt had a living ex-president. The caretaker government declared it had no opposition to Mubarak being tried on corruption charges.

Hosni Mubarak was placed under house arrest, and his health was reported to be deteriorating. Mubarak was put on trial for premeditated murder in May 2011. He also faced charges of corruption and misrule. He was found guilty of mismanagement and fined thirty-three million dollars. Mubarak pleaded not guilty to murder charges. His ill health meant he was held in a military hospital during the trial.

Mubarak was found guilty in 2012 of the lesser charge of failing to prevent murder and was sentenced to life imprisonment. The ruling was overturned, and Mubarak was released after a retrial in 2013. In 2014 he faced further trials for embezzlement and was found guilty and sentenced to three years imprisonment. This was again put to a retrial, but was upheld in 2015 and Mubarak was fined sixteen million dollars. On 2 March 2017, Mubarak was acquitted for the third time of the murder of protesters in 2011.

Hosni Mubarak married his wife Suzanne in 1959. The pair has two sons together, Alaa and Gamal. Mubarak’s sons were tried and found guilty of embezzlement along with their father during the trials following the Arab Spring in 2011. They served four-year sentences. Alaa was one of the prominent names listed with offshore accounts in the Panama Papers.

In 2010, Hosni Mubarak underwent surgery for stomach cancer in Germany. Reports and rumors mounted about his health following his resignation. It was reported he suffered a heart attack in 2011. Mubarak spent most of his imprisonment in the Cairo military hospital. Even when his sentence was completed Mubarak remained as he was too ill to leave. In 2014 it was reported that Mubarak suffered a broken leg following a fall in hospital.