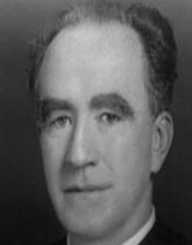 American lawyer, judge, and politician Frank Murphy was born on the 13 April 1890 in Harbor Beach, Michigan to Irish immigrants Mary Brennan and John Murphy. His father was a lawyer, and the family was Roman-Catholics.

After high school graduation, Frank Murphy enrolled at the University of Michigan. He obtained a BA (1912) and an LLB from the law school (1914). He subsequently furthered his law studies at Trinity College, Dublin and Lincoln’s Inn, London. These further studies took place after his discharge from the U.S. army in 1919. He had served in the army during World War I and was discharged with the rank of Captain.

Frank Murphy was a lecturer at the University of Detriot before enlisting in the U.S. Army during World War I. Returning home to the United States in 1919; he was appointed a chief assistant to the U.S. Attorney of the Eastern Michigan District where he built up a reputation of having a formidable legal mind.

Frank Murphy went into private practice for three years with Edward G. Kemp in Detriot City. (1920-1923). He was then made a Judge of the Recorder’s Court in Detriot City dealing with criminal law (1923-1930). In 1930 he was Mayor of Detriot City. Then in 1932, Murphy was made the Governor-General of the Philippines. After the role of Governor-General was abolished, he was appointed as the United States High Commissioner (1935-1936).

During his time there he observed how oppressed the tenant farmers were and spoke of the need for social justice. Returning to the United States, Murphy was appointed Governor of Michigan (1936). During tough economic times, he had to deal with striking workers at General Motors. After a court order was obtained to force the workers to abandon the strike, Murphy refused to call in the troops to enforce the court order. He lost his bid for re-election in 1938.

In 1939, Frank Murphy was appointed the U.S. Attorney General where he focused on breaking the power of crime syndicates. He was appointed an Associate Justice of the U.S. Supreme Court in 1940 by President Roosevelt, remaining on the bench until his death in 1949.

Frank Murphy never married. He died in Detriot at the age of 59 from heart disease on the 19 July 1949.