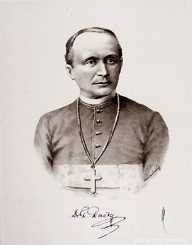 Famous Croatian historian and politician Franjo Ra?ki was born on November 25, 1828, in Fužine, a village near the city of Rijeka. He obtained his secondary education in the cities of Senj and Varažd?n. He subsequently completed his graduation with a degree in theology. In 1852, he was consecrated a Catholic priest by the bishop Ožegovi?. In 1855, he completed his Ph.D. in theology in Vienna.

Franjo Ra?ki started his career as a teacher and historian in the city of Senj. Deep-rooted patriotism and an active approach towards his work led him to the islands of Kvarner where he began organizing the research of Glagolitic documents. Glagolitic is the oldest known Slavic script. During his research, he frequently visited the village of Baška located on the Krk Island. It was the place where the famous Baška Tablet was found. Based on his research, Franjo published his major work ‘The Age and Activities of Saints Cyril and Methodius, the Apostles among the Slavs.’

In 1857, Franjo Ra?ki shifted to Rome and started working at the Croatian Institute of St. Jerome. He spent three years at the institute amidst challenging conditions. During this time, he explored the Roman archives looking for documents that dealt with the Croatian history. He actively participated in courses that taught paleography and historical sciences. Thus, due to this pioneering research, Franjo became the forerunner of the Croatian National Revival movement.

In the same year, being the church representative from Senj, Franjo Ra?ki was also appointed as a member of the Croatian Parliament. The parliament was summoned after a gap of 12 long years. As a member of the Parliament, he was able to draw the attention of the government and that of the general public towards his ideas and beliefs regarding the Croatian national revival movement. He used his writing skills to shed light on Croatia-related issues of his time.

Franjo Ra?ki advocated the merging of Dalmatia with Croatia, he wrote about the behaviour of the Croatians living in the cities of Srijem and Rijeka and was a major voice against Hungarian expansionism who continuously and critically analyzed the relationship between the two countries - Croatia and Hungary.

Franjo’s editions of the Yugoslavian Academy of Sciences and Arts viz. Rad, Starine, and the Codex diplomaticus Regni Croatiae, Dalmatiae et Slavoniae stand as paragon examples of legal history. They are published to date. His original historical works comprise of a plethora of information. Some of his other notable works include the ‘Bogomili i Patareni,’ a document that unraveled new information about the Bosnian Church and ‘Documenta historiae Croaticae periodum antiaquam illustrantia,’ a scientific work that compiled sources of early medieval Croatian history.

Franjo Ra?ki was known as the Father of Croatian modern critical historiography. He died on February 13, 1894, in Zagreb.