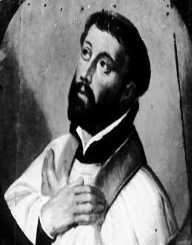 Francis Xavier was born 7th April 1506, to Juan de Jasso y Atondo and Dona Maria de Azpilcueta y Aznarez. He was born in the family’s castle in the Kingdom of Navarre, which is known in current times as Spain. Francis Xavier's family was one of the wealthiest in the country. In 1512, Navarre was invaded by Ferdinand, King of Aragon. The war lasted over 18 years. The family’s land was confiscated. The outer wall and gates were destroyed, along with two towers of the castle.

Xavier’s father died suddenly in 1515, and he was raised by his mother, in conjunction with a local parish priest. He was bi-lingual, speaking both Basque and Spanish. He was a studious person, and in 1525 he went to the College Sainte-Barbe at the University of Paris to study and graduated in 1530 with his degree of Master of Arts. Whilst at university he shared a room with Pierre Favre and Ignatius of Loyola. Ignatius converted several students to the priesthood, and eventually, Xavier joined them.

In 1534, seven students met at a church outside of Paris, and made private vows of poverty, chastity and obedience to the Pope. Among the seven were Ignatius and Xavier. Francis Xavier began theological studies that same year, and was ordained in 1537. Once he had graduated, Francis Xavier began to teach the philosophy of Aristotle at the Beauvais College.

The Society of Jesus (known as the Jesuits) was established after much discussion and approved by Pope Paul III in 1540. King John of Portugal requested Jesuit missionaries that year to go and preach to his new holdings in India, as he felt Christian values were lacking. Two Jesuits were chosen, but one fell ill at the last moment, paving the way for Xavier to take on the task, and become the first Jesuit missionary.

Francis Xavier left Rome in March 1540. He arrived in Lisbon during June and had a private audience with the King and Queen. He left Lisbon in April 1541, along with two other fellow Jesuits, bound for Goa, and the Portuguese Indian settlement there.

Francis Xavier was commissioned by the King to get things back on track from a Christian viewpoint. Francis Xavier decided he would deal with the Portuguese first, and for several months after arriving, he spent most of his time teaching the children, and also preached to the sick that were in hospital.

For the next three years, he preached throughout southern India and Ceylon, many of the people converting. He was responsible for building almost 40 churches along the coast.

In 1545, he decided he would travel further afield to preach, and decided on a journey to the island of Celebes (currently known as Indonesia). For the next couple of years, Xavier traveled to various islands, preaching the gospel. In December 1547, he met a Japanese man named Anjiro. He had traveled specifically to meet Francis Xavier and became the first Japanese Christian.

Francis Xavier traveled to Japan, arriving in July 1549. He traveled do different provinces over the next few years, being permitted to preach. He was the first Jesuit to visit Japan as a missionary. It was tough going for him with the language barrier and other issues, but Francis Xavier persevered. The Japanese didn’t convert easily, as most of them were already Buddhist or Shinto. Francis Xavier was in Japan for two years and established congregations at several locations.

By 1552, he was back in Goa. He then set off for China but met resistance. Later in 1552, he reached Shangchuan, which was an island of China. In December 1552, he died from a fever while he was still at Shangchuan.

Francis Xavier was beatified on 25 October 1619, by Pope Paul V.

Francis Xavier is considered one of the greatest missionaries for the Roman Catholic church since Saint Paul.

It is thought that Xavier converted around 30,000 people to Christianity.

Even today, there are many Jesuit missions throughout India. Saint Francis Xavier’s work was unparalleled, except by Saint Paul.