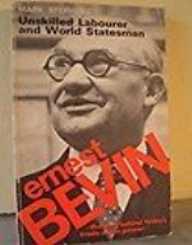 Ernest Bevin was a British Statesman, politician and one of the most influential trade union leaders during the first half of the twentieth century. During World War II, Winston Churchill inducted him into his wartime coalition government as Minister of Labour and National Service. During the immediate post-World War II period he served the government in the vital capacity of Foreign Secretary. He was instrumental in rebuilding the economic and defensive infrastructure of Western Europe after the devastation of World War II.

Ernest Bevin was born on March 9, 1881, in the village of Winsford in Somerset, England. His mother, Diana Bevin, reportedly a widow since 1877, died in 1889 leaving him orphaned and poverty-stricken. No account of his father is available. Bevin moved to Morchard Bishop in Devon with his half-sister’s family after his mother’s death. He did not have the opportunity to receive any formal education. He attended two village schools. He started attending Hayward’s school, Crediton in 1890 but dropped out in 1892.

At the age of 11, Ernest Bevin started working as a labourer. He went to Bristol and found the job of a mineral water truck driver. Soon he joined the Bristol Socialist Party. In 1910, he was selected as the Secretary of the Bristol branch of the Dockers’ Union, a post he held till 1921. In 1914, he became a national organizer for the union. In 1922, Transport and General Workers Union (TGWU) was formed, and Bevin played a crucial role in its formation.

Very soon Ernest Bevin was chosen as the General Secretary of TGWU making him a strong labour leader of the country representing the ground level workers in the labour party with maximum power. His tenure as General Secretary of TGWU saw the union becoming the most significant trade union of the world underlining his excellent organizational skill.

In the General Elections of 1918 and 1931, Ernest Bevin contested as a labour party representative from the constituencies of Bristol and Gateshead respectively. He lost in both the elections. During the Great Depression of the 1930s, he opposed the second labour party government of Ramsay Macdonald for its failure to generate employment and refused to support the National Coalition Government (1931-35) of Ramsay Macdonald formed with the Conservatives. He recommended British rearmament and formation of active foreign policy. He was a staunch opponent of Nazi Germany and fascist Italy and the British appeasement policy of the dictatorial powers.

In May 1940, Winston Churchill formed his wartime coalition government. Ernest Bevin was given the portfolio of Minister of Labour and National Service and was included in the War Cabinet. His most significant achievement as Minister of Labour in the wartime cabinet was his success in the maximization of British labour supply both to the Armed forces and to the domestic industry with minimum disruptions of strikes etc. In the post-war labour government of Clement Attlee, Bevin was appointed as the Foreign Secretary. He facilitated the securing of a low interest $3.75 billion loans from the United States for the economic revival of his war-ravaged, near bankrupt country.

After the World War II, Ernest Bevin was looking forward to uniting the Western European Countries on a common platform. Western Europe was becoming the main playground of Cold War. Bevin was against recognizing the new Soviet-sponsored governments in the Balkans. The first step in his bid to establish Western Europe as a single military alliance was the Dunkirk Treaty with France in 1947.

The signing of the Brussels Pact (March 17, 1948) ensured Ernest Bevin's vision of a collective security arrangement among Britain, France, Belgium, Netherlands, and Luxembourg. A slew of pact, treaties, and agreements that followed are the Organisation for European Economic Co-operation (April 16, 1948) and North Atlantic Treaty (April 4, 1949). These pacts and treaties significantly enhanced the formation of NATO in 1949.

His tenure of Foreign Secretary also saw the end of the Mandate of Palestine and the creation of the State of Israel. Ernest Bevin was often criticized for his mishandling of the situation. The partition was not at all peaceful, and hundreds of thousands were displaced involuntarily. He again negotiated a deal with Iraq. Under the Portsmouth Treaty of 1948, Britain continued to control Iraqi foreign affairs, and Iraq became dependent on Britain for their military arsenals and training.

The information about his personal life is not known to ordinary people. Ernest Bevin was married and had a daughter. He died on April 14, 1951. In 2006, some declassified intelligence report revealed the fact that in 1946, Jewish terrorist groups had hatched a plot to assassinate Ernest Bevin.