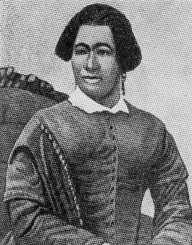 Nineteenth-Century African American concert singer Elizabeth Taylor Greenfield was born into slavery around 1820. She came into existence in Natchez, Mississippi, where her parents worked in the plantations as a slave. Her mother Anna Greenfield hailed from an Indian descent whereas her father Taylor was an African. Elizabeth H. Greenfield, the wife of the plantation owner, was an abolitionist. She divorced her husband, moved to Philadelphia and freed all her slaves. Working with the American Emancipation Society, she sent 18 of these emancipated slaves to Liberia. This group included Anna Greenfield along with her other two daughters. However, Elizabeth remained in Philadelphia with her mistress.

Elizabeth had an inborn musical talent. With encouragement from her foster mother Mrs. Greenfield, she studied and practiced music mostly by herself. Passionate about singing, she eventually began performing as a Church vocalist. Soon, she developed excellent skills in playing instruments like guitar, piano, and harp. She learned all these instruments on her own. The prevailing discriminatory racist ideology of her country continuously hindered her musical training. In spite of all the odds, she was able to develop her musical talent exceedingly well. She possessed a full, resonant voice with a stunningly marvelous range. Her first public performance happened in the fall of 1851. During the 1840s, she performed in a number of private events. Thereafter, she traveled to Buffalo. She made her debut public appearance performing on behalf of the Buffalo Musical Association. At her debut appearance, she captivated the audience with her multi-octave range singing.

After her enthralling debut performance in Buffalo, she embarked upon a concert tour of multiple cities of America. She toured the likes of Chicago and Boston during 1851-52. The print media, critics and the people, in general, applauded her performance profusely. Her exceptional performance all over the United States made her the first nationally acknowledged African-American concert singer. The friends and well-wishers of Elizabeth arranged a testimonial concert in March 1853 featuring her performance. The main aim of the concert was to raise funds for her proposed tour of Europe for further training. In May 1853, she appeared for her first London performance. The timely patronage of the Duchess of Sutherland and Harriet Beecher Stowe made her London tour possible.

On May 10, 1854, she became the first African-American singer to perform before the British royalty including the Queen at Buckingham Palace. She toured extensively and performed in several cities of England and Ireland before finally performing in front of the Queen. Her performance received the same enthusiasm and applauds in Europe as well, as was received in her native country. The media was effusive in her praise. They initially hailed her as the ‘African Nightingale’ and later nicknamed her as the ‘Black Swan’.

In July 1854, Elizabeth returned to America after the conclusion of her Europe tour. Upon her arrival, she began her second extensive concert tour of the North Eastern parts of the United States and Canada. Proper advertisements were the highlights of this tour. Her success in Europe, the multi-octave range of her singing and the musical maturity she achieved through her mentor Sir George Smart was prominently mentioned in these advertisements. She settled in Philadelphia after the end of her second tour and began to work as a vocal teacher. Thomas Bowers, later nicknamed "The Colored Mario" and "The American Mario" and Carrie Thomas were among her exceptionally successful pupils.

In 1856, she undertook another concert tour which lasted for around a year. Her last concert tour occurred during 1863. She arranged and participated in a number of charity concerts. The proceeds of these charity concerts were donated to the orphanages in New York, Detroit, Buffalo and her hometown Philadelphia. She organized a common platform for the upcoming African-American singers in the form of Black Swan Opera Troupe. Besides, she began directing the choirs of her church, Shiloh Baptist during her later years.

Elizabeth suffered an illness during 1874. She had to restrict all her activities due to this illness. On March 31, 1876, she breathed her last after having failed to recover from her illness. The reason for her death was cited as Apoplexy. She died at her Philadelphia home at the age of 57.