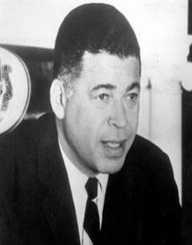 Edward William Brooke III was born 26th October 1919, to Edward and Helen Brooke. Brooke was born in Washington, D.C., in the United States. He had two siblings, one older, and one younger.

Brooke studied at Dunbar High School which was recognized as one of the best high schools available for African Americans. He graduated in 1936, and then went to Howard University. In 1941, he graduated, after studying political sciences and social studies.

In 1941, Edward Brooke joined the U.S. Army just after the attack on Pearl Harbor by the Japanese. He served in the military for five years as an officer, and he fought in Italy during that time. After he left the army, Brooke went back to his studies, enrolling at Boston University School of Law. He graduated in 1948.

In 1950, Brooke ran for a seat in the House of Representatives, to represent Massachusetts. He won the Republican nomination but wasn’t successful during the election. He then tried for the position of Secretary of State, but he was unsuccessful there as well.

The Republican Party realized he had a lot to offer, so he had several positions offered to him, but none were what he was wanting. Edward Brooke was looking for a high-profile position in politics, and he accepted the role of Chairman of the Finance Commission of Boston.

He was very successful in the position, and he was able to use that as a stepping-stone in the election for Attorney General of Massachusetts, which he won in 1962. He had the honor of being the first African-American Attorney General in the United States. He worked on several high-profile cases and prosecuted against organized crime and the corruption that went with it.

In 1966, Edward Brooke successfully ran for a seat in the United States Senate, and he served there for two terms, until 1979. He was a very active member of the Party, organizing lunch meetings and strategy sessions.

One of Brooke’s main projects was working towards affordable housing and stopping discrimination in housing. He wrote the 1968 Fair Housing Act in conjunction with another member of the Senate Banking Committee named Walter Mondale. The Act was somewhat watered down by the time it was signed by the President, so Brooke continued to campaign during his career on housing issues.

Other areas that Edward Brooke was involved with included opposing attempts to deplete the Equal Employment Opportunity Commission and helping to defeat two Supreme Court judicial nominations made by President Nixon.

He served on the Senate Banking Committee as the most senior Republican. He also served on two subcommittees, namely, Foreign Operations and Labor, Health and Human Services. Brooke worked diligently on other issues such as equal education for women and legalizing abortion.

After his 1978 campaign finished in defeat, Brooke returned to practicing law, and he also served on several boards of large businesses.

In 2002, the first of the Brooke Charter Schools was established. This group of schools supports students from lower socioeconomic backgrounds to complete their education, recognizing that students can succeed regardless of their background.

Among his many awards and honors, Edward Brooke has the following:

Brooke was also awarded a Bronze Star Medal for his bravery during battle in World War II.

In 1947 Edward Brooke married Remigia Ferrari-Scacco, and the couple had two children. They divorced in 1979.

Brooke’s second marriage was in 1979 to Anne, and he also had a child with her.

He was diagnosed with breast cancer in 2002 and became a major advocate to bring awareness to the disease. Brooke died on 3rd January 2015.