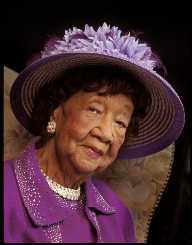 Dorothy Height is well-known for serving the National Council of Negro Women as the organization’s president. Aside from that, Height also encompassed as Civil Rights and Women’s Rights Activist. She is awarded the Presidential Medal of Freedom in 1994 and the 2004 Congressional Gold Medal due to her extensive work as an active participant in the development of quality of life of African-American women.

Height was a bachelorette throughout her life; she never married nor had any children of her own. She died at the age of 98 on April 20, 2010. Many notable personalities came in attendance at her funeral; among them are 44th US President Barack Obama along with First Lady Michelle Obama. Heights remains are buried at Fort Lincoln Cemetery located in Maryland.

Beginnings of a Powerful Woman

Dorothy Irene Height was born on March 24, 1912, in Richmond, Virginia. Her family consisted of a father who worked as a contractor and a mother who worked as a nurse. Along with her family, they relocated to the suburbs at Pittsburgh in Rankin, Pennsylvania when she was five years old and took education there.

The young Height proved to be a bright and intelligent student, displaying excellent oratory skills. During high school, she joined and won a local oratory competition at the school. As a reward, Height was sponsored a college scholarship by the Elks.

Dorothy Height's initial choice was Barnard College where she passed with flying colors, but Barnard had an unwritten rule that only two students of color are allowed at the time. As a result, Height's admittance was canceled, and she was forced to choose a new college to attend. Determined to learn, she enrolled at New York University where she attained a degree in education in 1930 followed by a master's degree in 1932, majoring in psychology.


The Start of Activism

For a time, Dorothy Height worked as a social worker upon graduating from college and then in 1937; she joined the staff at Harlem YWCA. At the age of 25, Height became a member of the National Council of Negro Women (NCNW), officiating the start of lifetime work dedicated to activism. She was inspired to join when then-president of NCNW Mary Bethune came to visit her workplace along with then-First Lady Eleanor Roosevelt.

In due time, her rankings increased, and she officially became the president of the council in 1957. Her term as president lasted until 1997, fulfilling forty years of dedicated service for the NCNW.

Throughout her life, Dorothy Height came to work with varying people who also served the same cause. She managed to work with James Farmer, Martin Luther King Jr., Roy Wilkins, Whitney Young, A. Philip Randolph and John Lewis, or otherwise known as the Big Six of the civil rights movement.

She was present alongside Martin Luther King Jr. when he delivered his "I Have A Dream" speech. Height assisted in the organization of the famed 1963 March on Washington.

Dorothy Height continued on her fight for civil rights in later years. She was one of the founders of African-American Reproductive Freedom that was formed in 1990.

In 1977, she retired from her work at YWCA but continued to serve at NCNW until her retirement in 1997.