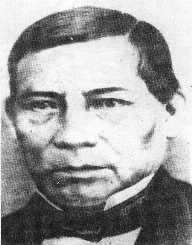 Benito Juárez was born on the 21 March 1806, San Pablo Guelatao, México. His parents, Marcelino Juarez and Brígida García, were Mesoamerican Indians who died in 1809. After his parents died when he was three years old, he was raised by an uncle. When Benito Juárez was twelve years old, in December 1818, he left his uncle’s home to live with his sister in Oaxaca. There Juárez did a variety of menial jobs to support himself, at one stage working as a servant for Antonio Maza.

With the assistance of a Franciscan monk, Antonio Salanueva, Benito Juárez was able to join the local Catholic seminary. He studied Latin and completed the curriculum but decided against becoming an ordained priest and instead decided to study law at the Institute of Sciences and Arts. Juárez subsequently graduated with a law degree in 1834.

Benito Juárez began his political career by winning a seat on the municipal council in 1831 while still a student. By 1841 he was appointed a judge and the same year he became the Governor of Oaxaca.

In 1846 when President Valentin Gomez Farias took office, Benito Juárez joined Congress. He supported the liberal reforms aimed at strengthening México’s effort in the U.S.-Mexican War. After these changes failed, there was a conservative backlash, and Juarez returned to his role as Governor of Oaxaca. As governor, he advocated a guerilla war against the US, refused General Lopez de Santa Anna asylum when the conservative government collapsed, and he also was against the Treaty of Guadalupe Hidalgo. When the dictator returned in 1853, Juarez went into exile in New Orleans for two years.

By 1955 he was back México, and in 1857 Benito Juárez became president. He was president during the War of the Reform as well as the fight against monarchists under the French-backed Emperor Maximilian I. Juárez remained president of México until 1872.

Benito Juárez led the liberal political and social revolution in México which came to be known as La Reforma (1854-1876).

México’s first Liberal Reform Law which passed in 1855 is known as the Juarez Law. This law restricted administrative privileges, especially in the courts.

Benito Juárez married Margarita Maza, an Oaxacan, in 1843. The couple had ten children together. They remained married until his wife died in 1871. Juarez also had two children from an earlier relationship.

Benito Juarez died of a heart attack in 1872.