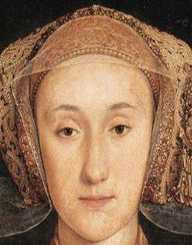 Anne of Cleves, the fourth wife of Henry VIII of England, was the daughter of the Duke of Cleves, John III of the House of La March and Maria, Duchess of Julich-Berg. Anne was born on the 22 September 1515 in Dusseldorf in what was then the Duchy of Berg, part of the Holy Roman Empire. She had sisters Sibylle and  Amalia and a brother William. Anne was betrothed to the Duke of Lorraine’s son Francis when they were both children in 1527, but the betrothal was cancelled in 1535. Anne’s father died in 1539, and her brother William became the Duke of Cleves.

Anne of Cleves had a limited education and could only write and speak German.

In 1538 Thomas Cromwell began searching for a suitable bride for Henry VIII to seal a Protestant alliance. When Spain and France signed an agreement in March 1539, Thomas Cromwell persuaded Henry VIII to find a Protestant ally Negotiations with the William, the Duke of Cleves were opened. One of the requirements was that the painter Hans Holbein the Younger would go to Dusseldorf to paint Anne as well as her sister Amalie. By the 6th October 1539, marriage treaty between King Henry VIII of England and Anne of Cleves was in place.

Anne of Cleves and her entourage left for England, and when Henry VIII met his prospective bride on the 1 January 1540, he was disappointed. He found her unattractive and asked Cromwell to find a loophole in the marriage contract that would give him a way out of marrying her yet keeping the Cleves alliance. The marriage went ahead and on the 6 January 1540, although the marriage was not consummated. Henry VIII meanwhile, had fallen in love with Kathryn Howard, who was one of Anne’s ladies-in-waiting.

Anne of Cleves was sent to Richmond Palace in July 1540, and on the 9 July 1540, her marriage to Henry VIII was annulled. Grounds for the annulment were that Anne’s earlier marriage contract with Francis, Duke of Lorraine. The terms negotiated were that Anne would be known and treated as the King’s sister, with precedence over all ladies of the court apart from the Queen and the King’s daughters. She was also given a generous annual income and Hever Castle, the childhood home of Anne Boleyn.

That same year, on the 28 July 1540, Thomas Cromwell was executed for treason, and Henry VIII married Kathryn Howard at Oatlands Palace in Surrey, England. When Kathryn Howard was found guilty of treason and adultery, she was beheaded on in February 1542. Anne and the Duke of Cleves asked Henry VIII to consider taking Anne back as his lawful wife, but the King refused. On the 12 July 1543, Henry VIII married Katherine Parr and later that year, Anne’s mother Maria of Julich-Berg died.

King Henry VIII died on the 28 January 1547 and was succeeded by his son Edward, who was ten years old. The Duke of Somerset, Edward’s regent, resented the expense Anne of Cleves incurred and moved her to Penshurst Place. When Edward VI fell ill, he nominated his cousin Jane Grey to succeed him (6 July 1553). Lady Jane Grey was proclaimed Queen, but the decision was unpopular and instead, people supported Henry’s daughter Mary instead.

On 19 July 1553, Mary was crowned Queen Mary I of England. Anne was at Mary I’s coronation ceremony at Westminister Abbey, walking behind with Henry VIII’s daughter Elizabeth. On the 16 July 1557, Anne of Cleves died at Chelsea Old Palace. She was buried at Westminster Abbey in London, England.