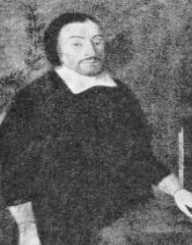 Mystic and religious poet Angelus Silesius was born Johann Scheffler in Breslau, Silesius which at the time was part of the German Habsburg Empire. Silesius was born into a family who practiced the Lutheran faith, and Silesius was baptized on the 25 December 1624. His father Stanislaus Scheffer, a  Pole, was a soldier and a member of the local ancestry; his mother was Maria Hennemann.

After obtaining his degree in  1648, Angelus Silesius was appointed court physician to the Prince of Oels in Silesia. Silesius was received into the Catholic Church in 1653 with the confirmation name of Angelus. Silesius published his first work in 1657, two works The Soul’s Spiritual Delight, a collection of religious songs and The Cherubic Pilgrim, which consisted of over a sixteen hundred rhymed religious couplets.

In 1661 Silesius was ordained into the Catholic Church. Ten years later, in 1671, Silesius retired to the Knights of the Cross Monastery in Breslau.

Originally he was of the Lutheran faith but converted to Catholicism in 1653.

Angelus Silesius lasting legacy has been his two books of poetry The Soul’s Spiritual Delight and The Cherubic Pilgrim.

During his lifetime Angelus Silesius was involved in arguments with Protestant sects who counteracted his criticism of their beliefs. In 1633 Silesius began the publication of his fifty-five controversial tracts against the various Protestant sects. Thirty-nine were published in two books under the title Ecclesiologia.