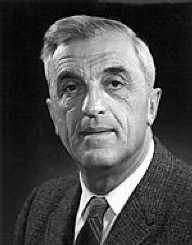 Alfred Kastler was born on May 3, 1902. He was a French physicist. In 1966, he was awarded the Nobel Prize in Physics for discovering and developing optical procedures to study Hertzian resonances in atoms. He researched quantum mechanics, and spectroscopy as an academician at the Blaise Pascal University, University of Bordeaux, University of Louvain and Ecole Normale Superieure. He won many awards during his lifetime.

Alfred Kastler was born on May 3, 1902, in Guebwiller in Alsace currently in France. He was born to Frederique Michel Kastler and Anne Catherine Kastler. He attended the Oberrealschule of Colmar, Alsace which later became the Lycee Bartholdi. He loved science from a young age as he was influenced by his science and mathematics teachers. He read the book on atomic structure and spectral lines which was written by Arnold Sommerfeld. The book inspired his research career in the principle of conservation of momentum. In 1921 he graduated from high school and joined Ecole Normale Superieure in Paris. In 1926, he graduated from the school with a BS in Physics.

Alfred Kastler served as a physics teacher at the Lycee of Mulhouse from 1926 to 1931. In 1931, he joined the Bordeaux Faculty of Science as an assistant of Professor Pierre Daure. In his free time, he would conduct research, and he was introduced to experimental spectroscopy by Professor Daure. His research was mostly based on spectroscopy, that is, Raman spectroscopy and atomic fluorescence. In 1936, he became a physics lecturer at the Blaise Pascal University in Clermont Ford. In 1937, he established that sodium vapour can absorb the D line of the twilight sky. He collaborated with Jean Bricard to establish that the D line is polarized when the emission method is one of optical resonance generated by solar radiation.

In 1938, Alfred Kastler was inducted as a professor at the University of Bordeaux. He held the position of professor in the institution until 1941. In 1941, he went back to Ecole Normale Superieure where he became a physics teacher. In 1945, he became a professor at the institution where he stayed until 1968. After World War II, he and his student Jean Brossel formed a small research team on spectroscopy. In 1951, they founded the Laboratoire de spectroscopie Hertzienne de I’ENS in the Department of Physics of Ecole Normale Superieure. In 1994, the laboratory was named as Laboratoire Kastler-Brossel’.

Alfred Kastler and Brossel continued to research spectroscopy, the study of the interaction between electromagnetic radiation and matter and quantum mechanics. They suggested the double resonance method that combines magnetic resonance and optical resonance. Their laboratory has played a significant role in the development of atomic physics in France. In 1968, he became the Director of Research at the National Centre for Scientific Research, a post that he held up to 1972. He received honorary doctorates from the University of Louvain, University of Pisa and University of Oxford. In 1971, he published his poetry ‘Europe, my fatherland: German songs of a French European.’ Alfred was also the first chairman of the Action Against Hunger which was a non-governmental organization set up with the aim of ending world hunger.

In 1966, Alfred Kastler was awarded the Nobel Prize in Physics.

In 1924, Alfred Kastler married Elise Cosset with whom he had three children, Daniel, Mireille, and Claude-Yves. He died on January 7, 1984, in Bandol, France. He died at the age of eighty one. He is one of the physicists who is remembered for his contributions in the field of physics.