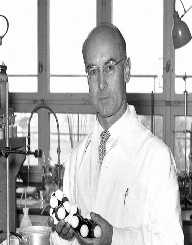 Also Known For : The First Person To Synthesize LSD

Albert Hofmann was born on January 11, 1906, in Baden, Switzerland. His father was Adolf Hofmann, and his mother was Elizabeth Schenk. He also had three siblings.

As a young adult, Albert Hofmann attended the University of Zurich. While there, he studied the chemistry and biology of both plants and animals. He graduated from the school in 1929 with a Ph.D.

After he was done with studying at the university, Albert Hofmann took a job making medicine at Sandoz Laboratories. It was here, in 1938, that the first synthesized lysergic acid diethylamide, better known as LSD. This would later prove to be a turning point in his career.  He did not intend for this to be a mind-altering drug. He created it in hopes that it could be a medical drug to reduce pain and the side effects of illnesses and diseases, mostly respiratory diseases.

Albert Hofmann experimented with the drug, even using it himself. Before the negative impacts of the drug were made clear, it was regularly prescribed in hospitals. Some of the things it was commonly prescribed for were to reduce pain in childbirth and to ease the effects of mental illnesses. Hofmann lived long enough to see the negative effects of his drug, though. He still thought it could be useful is used under the watchful eye of a doctor, and he resented the fact that it was illegal in so many parts of the world.

LSD wasn’t the only hallucinatory drug he discovered. In 1958, Albert Hofmann discovered another chemical, which is naturally occurring in some fungi, called ethacetin. He later created a synthetic material that was similar to the ethacetin. This new chemical was called psilocybin. He was interested in finding out more about these types of substances, so he traveled to Mexico to study the chemicals in hallucinogenic mushrooms. While in Mexico, he discovered a new compound, which was called ergine or lysergic acid amide. This was also similar to LSD.

In the 1960’s, Albert Hofmann focused on his research at Sandoz Laboratories. He had since been promoted to the director of the natural products department. He toured some in the 1960’s, giving speeches and lectures about that he had learned in his time at the lab. He stayed at the lab until he retired in 1971.

Albert Hofmann has written numerous books in the science and medical field. Many of his books are on the topic of LSD. Below is a list of some of his most famous books.

LSD: My Problem Child
Insight Outlook
LSD and the Divine Scientist: The Final Thoughts and Reflections of Albert Hofmann
Transfigurations (coauthored with Alex Grey and Stephen Larsen)
Plants of the Gods: Their Sacred, Healing, and Hallucinogenic Powers (coauthored with Richard Evans Schultes and Christian Ratsch)

In 1969, Albert Hofmann was given an honorary Doctor of Science degree from the Swiss Federal Institute of Technology.
In 1971, he won the Scheele Award from the Swedish Pharmaceutical Association.
After 1971 he worked as a member of the Nobel Prize Committee, although he never won a Nobel Prize himself.

Albert Hofmann was married to his wife, Anita, for most of his life. The couple had four children together. The marriage ended in 2007 with Anita’s death. One of Hofmann’s children also died before he did.