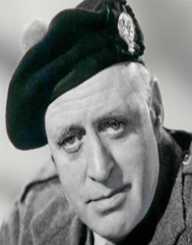 Alastair Sim was born on October 9, 1900. He was a Scottish actor. He died at the age of Seventy-Five years.

Alastair Sim was born Alastair George Bell Sim on October 9, 1900, in Edinburgh in Midlothian, Scotland. He was born to Alexander Sim and Isabella McIntyre. He was brought up alongside one sibling. He took his primary studies in Bruntsfield Primary School. He later joined James Gillespie’s High School for his secondary education. Sim after that enrolled in George Heriot’s School.  He was a part-time worker at his father’s shop. He then worked with Gieve’s a men’s outfit shop.

In 1918, he joined the University of Edinburgh to partake analytical chemistry. He later joined the army. He then was released from the army. Sim’s free time was his time to engage in poetry.  In 1922, he became an elocution teacher at a college in Dalry, Edinburgh where he served until 1924. In 1925, he became the Fulton Lecturer in Elocution in the University of Edinburgh until 1930. He formed his drama club here.

In 1930, Alastair Sim for the first time featured in ‘Othello’ as a messenger. In 1931, he made his Broadway debut. In 1932, he became Old Vic’s company member. He later played in plays of Shakespeare, Shaw, and Drinkwater. In 1935, he appeared in ‘The Riverside Murder’ as Sergeant McKay.

In 1969, he played Mr. Posket in ‘The Magistrate.’In 1971, he featured in an animation ‘A Christmas carol’ as Scrooge’s voice. In 1972, he played the role of a Bishop in ‘The Ruling Class.’ In 1975, he appeared in ‘Royal Flash.’ He later appeared in ‘Dandy Dick’ as Augustin Jedd. His last acting appearance was in ‘The Clandestine Marriage’ as Lord Ogleby.

In 1932, Alastair Sim married Naomi Plaskitt with whom he had one child. He died on August 19, 1976, in London, England. He died of Lung Cancer. He died at the age of Seventy-Five years.