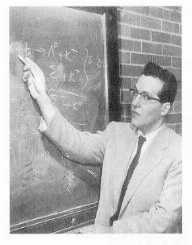 Physicist Abraham Pais was born in Amsterdam in the Netherlands to Jewish parents Jesaja Pais and Kaatje van Kleeff on the 19 May 1918. His parents were both school teachers, and he had one sibling, Annie. He was a gifted child who did well academically and had a happy childhood.

After receiving his doctorate in 1941 Pais held various teaching jobs until March 1943 when Abraham Pais was forced to go into hiding. The Nazis had begun to depart Dutch Jews to the concentration camps, and Pais spent time hiding in attics to avoid detection. The Gestapo arrested him in 1945. Pais’s sister Annie died in the camps, but he survived, along with his parents.

When World War II was over Pais worked initially in Copenhagen, Denmark at what is today the Niels Bohr Institute. Abraham Pais then, in 1947, he moved to America where he worked under J. Robert Oppenheimer at Princeton University in New Jersey at the Institute for Advanced Study.

In 1947 Pais was one of the scientists selected to attend the Shelter Island conference. The focus of the meeting was to brainstorm ideas to restore confidence in theoretical physics which was struggling after the development of the atomic bomb. The scientists were asked for input into what direction future research should take. Other scientists who attended included Albert Einstein, Linus Pauling, J. Robert Oppenheimer and Edward Teller. The conference is seen as a starting point for the postwar advances in quantum field theory and investigation into fundamental particles that existed at the time of the Big Bang theory of the origin of the universe.

Abraham Pais remained at Rockefeller University until his retirement in 1988. He divided his final years between Copenhagen in Denmark and the United States

Abraham Pais published his autobiography A Tale of Two Continents: A Physicist's Life in A Turbulent World (1997). Then in 1892, he released Subtle Is the Lord: The Science and the Life of Albert Einstein. This book won critical acclaim and is considered a classic among scientists. He was working on a biography of J. Robert Oppenheimer at the time of his death, and this was published posthumously by Oxford University Press in 2006. Other books include Inward Bound: Of Matter and Forces in the Physical World (1986) and The Genius of Science: A Portrait Gallery (2000).

Abraham Pais won the Robert Oppenheimer Memorial Prize in 1976 for his research into particle physics. Other prizes include the Physics Prize of the Dutch Physical Society (1992), Medal of the Science of the Royal Dutch Academy of Sciences (1993), the German Award of the American Physical Society (1994) and the Lewis Thomas Prize (1995).

Abraham Pais was married three times. His first wife was a poet, Lila Lee Atwill, whom he married in 1956. The couple had one child, a son Joshua (b.1958) before they divorced in 1961. He was married a second time between 1976 until 1985. Then in 1990, he married Ida Nicolaisen, a Danish professor and academic. They remained together until his death.

Abraham Pais died on the 29 July 2000 in Copenhagen, Denmark.