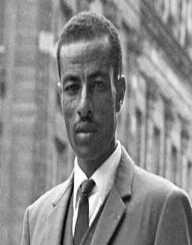 Abebe Bikila Demissie was born on 7th August 1932 to Bikila Demissie and Wudinesh Beneberu. Demissie senior was Beneberu's second husband. While Abebe was still young, the family relocated during the war, to a town called Gorro to remain safe. Demissie’s mother had divorced his father by this time, and while in Gorro, she met and married her third husband. Eventually, the family moved back to Jato where they settled into farming.

Abebe Bikila joined one of the regiments of the National Guard when he was around 20 years old. He used to run 20 miles to work and then home every day. The Ethiopian government brought a coach in from Sweden to train the National Guard, and it didn’t take him very long to notice the athletic ability of Bikila.

The coach’s name was Major Onni Niskanen. He soon began coaching Bikila, and the first marathon was entered in July 1960 and won. He then went on to the Olympics in Rome and won the marathon there.

Abebe Bikila returned home to a hero’s welcome. He was presented with the Star of Ethiopia, a chauffeur driven car, and a home to live in.

Shortly after, when the emperor was in Brazil on business, the Imperial Guard forces tried to stage a coup, which was unsuccessful. Many were killed or arrested during the fighting. Bikila was briefly arrested and questioned but escaped any punishment.

Abebe Bikila continued to enter marathon races, up to and including the Japanese Olympics in 1964. This time he wore shoes and won again in record time. One more, he returned home a hero, and received a house and car, as well as another promotion in rank, this time to 1st lieutenant.

In 1968, Bikila entered the marathon in the Mexico City Olympic Games but had to pull out during the race due to a broken fibula. It was the last time he ran a marathon. On returning home, he was promoted to the rank of captain.

Abebe Bikila had a serious car accident in 1969, which left him completely paralyzed. Over time, he did regain some movement in his upper body but never walked again. He received a visit from Queen Elizabeth II while in hospital.

Four years later, in 1973, he had a cerebral hemorrhage, which was a complication of his car accident, and died. During his time after the accident, he competed in archery and table tennis at the Stoke Mandeville Games and later entered other disabled games. Competing in the condition he was in was no mean feat and needs to be greatly admired.

In 1960, Abebe Bikila married a woman called YewubdarWolde-Giorgis and had four children. One of his children, a daughter called Tsige Abebe, wrote a biography titled “Triumph and Tragedy.”

Abebe Bikila has gone down in history as the first man to win back-to-back Olympic gold medals in the marathon. He was the man that led the way for other East African runners to follow in his footsteps, dominating long distance running at the Olympics.

Abebe Bikila has had a school named after him, a stadium, sports shoes and other awards. As a national hero in Ethiopia, his name will not be forgotten. He will always be known as the man who won an Olympic gold medal while running barefoot.