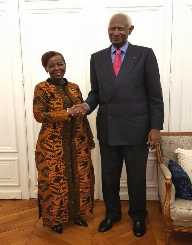 Abdou Diouf was born on September 7, 1935.  He is a Senegalese politician. He was the second President of Senegal. He has achieved a lot in terms of political and socio-economic development in Africa. He also served in many posts including being the Chairman of the Organization of African Unity.

Abdou Diouf was born on September 7, 1935, in Louga, Senegal. He was born to a Muslim father and a Halpulaar mother. He attended Lycee Faidherbe in Saint Louis for his primary and secondary education. After secondary school, he joined the Dakar University and then went ahead to study law at Sorbonne, Paris. He graduated from the school in 1959.

In 1964, he became the Secretary General of the Presidency until 1968. Abdou was later appointed the Minister of Planning and Industry until 1970. In 1970, he was appointed as the Prime Minister of Senegal where he remained until 1980. In 1981, Senghor resigned from the Presidency and Abdou became the President of Senegal. In 1983, he held elections, and he emerged a winner. In 1985, the opposition leader attempted to make a coalition which did not work as coalitions were banned from the constitution. In 1988, Abdou won the elections though opposing parties accused the government of electoral fraud. In 1993, he was re-elected as the President of Senegal for a seven year term.

In 2000, Abdou lost his presidency to Abdoulaye Wade, and he stepped down peacefully. In 2002, he was elected as the second Secretary General of ‘La Francophonie.’ The following year he became Secretary General. In 2006, he was also re-elected for another four years at the Organization’s Summit. He held the position until 2014. He also served as the President of the Organization of Africa Unity. Currently, he serves as a member of the ‘Sergio Vieira de Mello Foundation.’ He is also a member of the International Multilateral Partnership Against Cyber Threats International Advisory Board and the Foundation Chirac’s Honor Committee.

Abdou Diouf received the King Faisal International Prize for his services to Islam. He has also received eleven honorary doctorates.