Manannan was a God of the sea and death, and was deeply tied with the land of the dead in the West known as Tir na Nog. Tir na Nog was a place of endless beauty, youth, and joy, and was inhabited by the Tuatha de Danann. He bore souls across the water to the other world on his ship known as “Wave Sweeper”, which did not require sails to traverse the distance.

Manannan had many gifts that he shared with others, among them the Goblet of Truth held by Cormac mac Airt. Cormac was a High King of Ireland, and the cup given to him assisted him in ruling Ireland well. If three lies were spoken over it, it would break in three, if three truths were spoken, it would make it whole again. This gift vanished with Cormac’s death, as prophesied by Manannan. 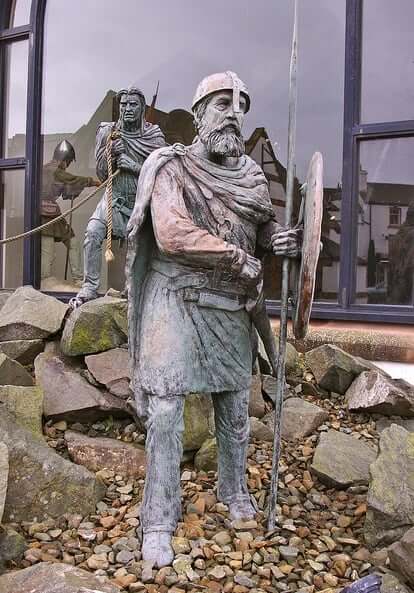 Truth played a strong theme in Manannan’s stories, for he also bore a sword named Fragarach that could slice through an armor, but a power arguably much greater was it’s ability to force the one it was pointed at to answer any question asked with the truth.

The tales of Manannan carry much that tell us that he was powerful, and it was believed that he was of such an age that he predated even the Tuatha de Danann. From the beginning of his mention in mythology, he bore great gifts to those who had his good graces.

His power was also evident in his command over death, and that given to him by what he wore. He wore a coat that while on him, protected him from all harm. His breast plate was enchanted such that no weapon could ever pierce it, rendering him indomitable in combat.

Manannan is also tied directly to Manawydan from Welsh mythology, playing so prominent a role that the very book in which it is recorded, the Mabinogi, is named for him. In those tales Manawydan served as an advisor to great kings, sitting by the side of Brân, King of Britain. Eventually, by Bran’s request, Manawydan severed Brân’s head, using it to serve as a talisman against invaders.

Manannan, being a god of the sea and death, served as a patron to those who plied the sea. His stories had their meaning deeply touched on during the time of the potato famine in Ireland.

Many families sent their sons and daughters to America to evade the famine, and the ships they traveled on were in quite poor repair. They became known as ‘coffin ships’ for how likely they were to sink.

With Tir na Nog being thought of as being in the west, and their generation watching so many of their young sail west to the Americas, it isn’t unusual that the memory of Manannan ferrying the dead that way touched the souls of all the Irish.

Share
Previous Magickal Timing
Next Expanding Your Reality, By Jove!