The earthy Virgo woman in love is quiet and observant, standing in the corner watching the crowd. The watery Scorpio man catches her attention, as he catches the attention of most people in the room. He is dark and mysterious, and she can’t read him as easily as others.

But the Scorpio male notices her beauty and grace and makes the first move to strike up a conversation. The Virgo woman Scorpio man couple are both fairly intuitive, but he challenges the Virgo female to figure out what’s going on in his mind. She is certainly able to keep up with his dazzling intellect, and he is impressed with her confidence and poise.

The Scorpio man sexually really shines in the bedroom, for he is confident, passionate and knows what Virgo women want between the sheets. He can satisfy any lover, and the Virgo woman is no exception. He can be a bit possessive at times, but this works for her as she often takes the more submissive position.

He is emotionally intense, and his continuous waves of passion can draw any woman under his spell. This will be an exciting change for her at first, and she will respond appropriately to keep up with his sexual desires. Read more about Virgo woman sex traits. 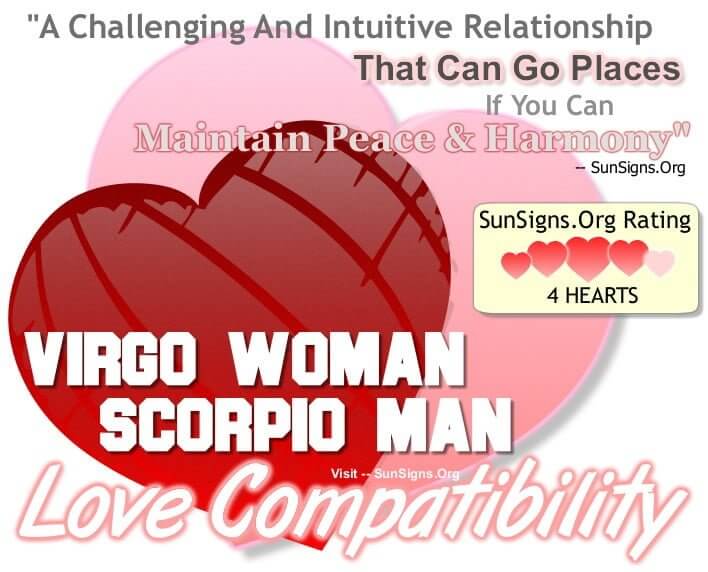 The Virgo women are not easily intimidated and enjoy the Scorpio men’s  thirst for knowledge. But he doesn’t reveal everything about himself, and she will have to get used to him keeping some secrets from her. She may find this petty at first, but because the Scorpio male in love is sincere in other ways, she can let it slide. And once she makes up her mind to keep the relationship going, things will move into the bedroom.

But after a while, the virgin will want to slow down and be romantic with her lover, which may irritate the scorpion. He is powerful and adventurous and wants to conquer the world with their lovemaking. She is softer and more affectionate, which he may grow bored with after time. Dating a Scorpio man means a lot of passion while dating a Virgo woman means no public display of affection.

The Virgo woman Scorpio man match will have to compromise to keep things sizzling between the sheets, but once she is devoted to her partner, she will do whatever it takes to get it right. He, in turn, will be right there with her. This kind of compromise will have to extend to affairs outside the bedroom as well.

Even though the Virgo woman him a more dominant position, she is still a perfectionist who wants the best out of herself, her partner, and their relationship. He doesn’t pay that much attention to detail, and often wants to go off and explore different opportunities in this Virgo compatibility.

If she tries to control the Scorpio male in any way, he will unleash his stinger and remain in a fighting stance until he feels he’s won. He is so dynamic it’s sometimes overbearing to the quieter Virgo woman, and they will have difficulty staying together. But he likes to be in control of every situation, and she hates drama so that this love compatibility may work in their favor in this Scorpio compatibility.

Virgo is a mutable earth sign whereas Scorpio is a fixed water sign, the Virgo woman Scorpio man compatibility gets a FOUR Hearts rating. If the Virgo woman can create a peaceful environment and the Scorpio man can maintain it, this couple will go far both in love and understanding. This love match can be ideal for each other.