Pisces As A Father Personality Traits

The Pisces man is perceptive, ingenious and smart by nature. You attract people because of your civilized behavior and gentleness. Your qualities of courage and thoroughness in your occupation are well known. You are a considerate and insightful person. If you are happy with your love mate, you will be dedicated to your partner.

Pisces father personality is basically a recluse and is happy to be busy with his scholarly activities. Your strong personality along with an endearing disposition will be highly appreciated by other people. Lofty thoughts and affectionate behavior are natural to you. You easily get along with your life partner, and your tolerance and devotion will add to the harmony of the partnership.

As soon as you are sure of becoming a parent, your imagination of parenthood starts. Once the Pisces dad’s child arrives on this earth, you begin a scrupulous preparation for nurturing your child. You will be highly devoted to your offspring and will try to make the environment highly comfortable.

The Pisces parent is compassionate, patient and at the same time is decisive. A Scorpio daughter in all likelihood will be highly compatible with a Pisces father. Each of them has common traits of being expressive, courageous and instinctive. 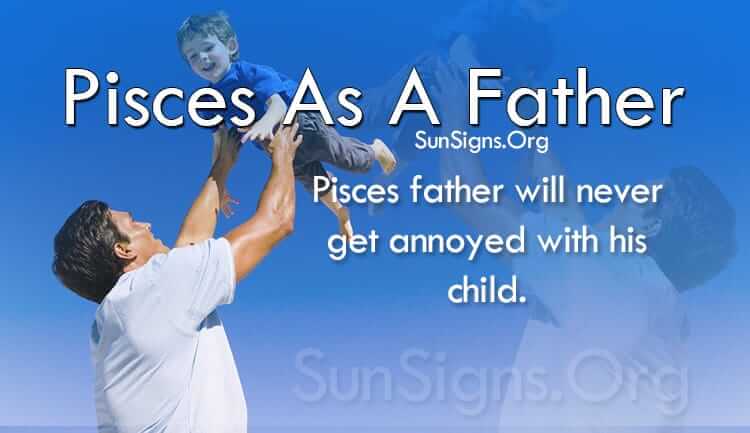 The Pisces father traits show he will understand the requirements of his child and he will enjoy with his child his new findings. In fact, your childlike innocence comes out while playing with him. You will teach your child the importance of imagination, and in your company he will shun hard facts of life and become a dreamer like you.

It is important that you bring him down to earth and teach him to face the actual hardships, keeping his imagination to a limited extent. You should ask him to attend to his studies and mingle with other children more.

The Pisces father characteristics show he will never get annoyed with his child in spite of his being grumpy at times. You will teach him to be independent and inspire him to discover his hidden talents. You will come up with fresh ideas to teach your child and will not impose your ideas on him.

Pisces fathers feel uneasy to discipline their child and allow them too much freedom. The child will not obey his father and will be spoilt unnecessarily.

The Pisces father personality traits show you tend to devote too much time and give him or her too much freedom which makes him awful when he becomes an adult. You are unable to point to his mistakes and correct them.

The Pisces father traits show you are very much close to your child and are anxious about his future. Plenty of love is showered on your child and you want your child to be decisive like you.

The child knows that you can be influenced easily and takes advantage of your weakness. The Pisces father characteristics show that plenty of disorder prevails in the home and the house will be full of the playing objects of your child.