Libra As A Father Personality Traits

As individuals, Libra men are charming, fun and extremely social creatures. They are constantly surrounded by friends, family and admirers.

Like the Libra women, they too are natural diplomats and fear the day that they become disliked or become entangled in a conflict. The Libra father personality have a great sense of justice and ensure that the people around them are treated well.

The Libra man’s charismatic, social and just nature transfers over to their style of parenting. As a father, the Libra male is always waiting for the day when he can become a friend to his children rather than just a father. He longs for that close friendship with his children and everyone else around him.

The Libra dad traits show that he has great patience that allows him to treat his children with the utmost kindness and justice even in the most unpleasant scenarios. Rarely does he ever berate or punish his children before giving them many chances to rectify the situation and change their ways. 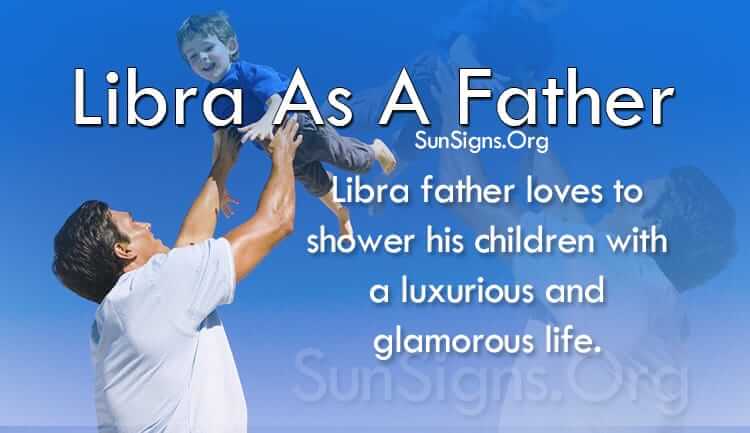 This Libra parent simply has a really tough time expressing any sort of disappointment or anger towards his children. This may cause his children to take his discipline lightly.

But he knows when to firmly stand his ground and ensure that they understand when he is serious. Considerate and compassionate, the Libra as a father personality is more than understanding of any sort of mistake committed by his children.

Bringing Out the Best

What makes the Libra father successful is the way he makes sure his children learns the concepts of fairness, discipline and debate well. They will be the most polite and good-natured kids anyone has ever met. There is no question that his children will be upstanding citizens throughout their entire lives!

The Libra father personality traits show that he is gentle yet firm in his disciplinary actions and general parenting methods, thus creating a very close bond with his children. Although he dotes on his children, that in no way overshadows his love for his partner.

The general Libra personality lies along the idea that all work and no fun is not a way to live! There is a time where being responsible is the top priority but there needs to be a healthy balance of work and fun. His love and partnership with the mother of his children is his highest priority.

The Libra father characteristics show that he makes a point in making her feel loved and respected in the midst of the chaos of their parenting life. Romantic date nights and spontaneous getaways are only at the surface of what the Libra father will do for his partner.

She is the best thing in his life and he will go out of his way to maintain an optimal relationship with her. His partner is not the only one he spoils with a life of grandeur and closeness.

Nothing Short of Glamor

The Libra dad personality traits show that he also loves to shower his children with a luxurious and glamorous life. Nothing is too good for his children! He is intent on making life at home the most comfortable, secure and wonderful place for his family to thrive in.

The Libra father traits show that cleanliness and organization are also very important concepts in a Libran’s home. Just like the phrase, he really does believe that “cleanliness is next to godliness” and is essential for personal happiness.

Despite the Libra father’s devotion and care for his children, he requires a great deal of freedom in his life. He does not like to baby sit or be a care taker of any sort when he is not in the mood to.

That is not to say that he is reckless, it is quite the opposite! The Libra father traits show that he simply needs some time to be with his partner, friends or even just to have some time to himself.