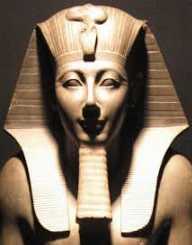 Thutmose III was the Pharaoh who created the economic stability of the ancient Egyptian empire.

Thutmose III was the first male of Pharaoh Thutmose II. His mother Iset was not the Queen, but a royal concubine of the palace. Since the queen had no son, the eldest son of the concubines became the crown prince.

Thutmose III was born as Prince Menkhperre in 1481BC. Three years later his father Thutmose II died. Unable to rule because of his age, Queen Hatshepsut assumed a proxy leadership style. She conducted the daily running of the kingdom. Thutmose III was educated as heir to the throne by the Egyptian traditions. The Queen later declared herself the pharaoh when Thutmose III was serving in the military. Young and inexperienced in governance and political intrigues, Thutmose let her Aunt Queen reign over Egypt.

Thutmose III became the chief of the Egyptian army at the appointment of the Queen. His stay away of the capital Thebes meant that the Queen had no real threat to her throne. But when Queen Hatshepsut passed on in 1458 BC, Thutmose III assumed the throne and became the sixth Pharaoh of the kingdoms eighteenth dynasty.

Before his death, Thutmose II had created a vast empire stretching from Mesopotamia in the north to the Levant in the east, Greece in the west and Nubia in the south. When Thutmose III became Pharaoh of Egypt, most of these captive kingdoms had rebelled from the grip of their Egyptian master. The new Pharaoh decided to appease them. Thutmose III thus started his long career as the military king of Egypt. For the next twenty years, he made seventeen successful military campaigns in the northern territories.

His first campaign was to retake the city of Megiddo in the present day Israel. So vital was the mission that Thutmose III had commissioned his close secretary Tjaneni to document every detail of it. When the kings of the region heard that the Egyptian army was marching for war, they formed a coalition to meet the Pharaoh in battle.

Choosing the alternative harder route the Egyptian army ambushed the enemy army from behind. The enemy kings retreated into the city. Instead of attacking the city, Thutmose III staged a siege. After eight months, the besieged kings sent emissaries asking for peace. Their wish was granted under the condition that they would keep peace and pay taxes as before.

The decisive victory sent shivers in the other rebellious territories of the north. Thutmose III continued with his military campaigns annually. In all of his attacks, he first offered a peace treaty. If his agreement was turned down, Thutmose enslaved the territory.

To consolidate his rule in the vast kingdom, the royal sons of the captured kings were taken to Egypt. There were two reasons for that. This ensured that their fathers maintained the agreement. The captive sons were assimilated into the Egyptian culture. After they returned to their native countries, Thutmose III used them to propagate his rule in their kingdoms. So Egypt was prosperous again with gifts and taxes coming from the entire empire.

Thutmose III commissioned many artistic ventures during his peaceful reign. The Egyptians started the industrial making of glass utensils. He built palaces with foreign architectural designs he had seen during his conquest. The most significant transformation happened in the city of Karnak. New structures were added to the temple. Obelisks were constructed. Gigantic pylons with an adjacent beam across were erected on the entrances of the temple. He also initiated the sculpturing of monumental statues in his honor.

But the most notable passion of his later life was the eradication of Queen Hatshepsut legacy. Thutmose III waged a spirited campaign to bring down all monuments which portrayed the reign of Queen Hatshepsut. Describing himself as a divine fearing king, he only left monuments that the late queen dedicated to Amun Ra, Osiris or Horis, the three main deities in the ancient Egyptian religion. He eventually replaced all the disfigured monuments with his own.

He died in the year 1425 BC. His mummified body was buried in the Valley of Kings.

Thutmose III reigned over Egypt for three decades. His reign was not long as compared to other pharaohs, but it was the most significant. His pragmatic leadership of both diplomacy and military intimidation made Egypt the most formidable empire of that time. Many of his architectural artifacts are scattered in cities and museums in Europe.