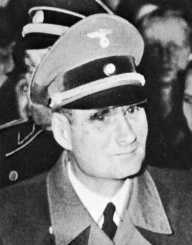 Hitler’s deputy Rudolf Hess was born on the 26 April 1894 in Alexandria, Egypt. He was born into a wealthy family who was involved in running a wholesale export business. When Hess was fourteen years old, the family returned to Germany to live.

After returning from the war, Rudolf Hess enrolled at the University of Munich to study political science. While at university he got involved in an anti-Semitic organization known as the Thule Society. Professor Karl Haushofer whose theories lead to the idea of Lebensraum was he strongly influenced one of his lecturers and Hess.

Unwilling to work in the family business as his father was trying to convince him to do, Rudolf Hess joined the German Army in 1914. After seeing action, he trained to become a pilot. After the war, he joined a right-wing organization, the Freikorps. This organization consisted of mercenaries who were paid to put down Communist uprisings in the country.

Rudolf Hess attended a lecture Adolf Hitler gave in Munich July 1920 and subsequently joined the Nazi Party. He was one of the party’s early members and became active by attacking para-military Marxists and like-minded people who tried to break up Hitler’s meetings and rallies. Along with Hitler, he was arrested after his participation in the Beer Hall Putsch in 1923. After his release in 1925 Rudolf Hess was Hitler’s secretary, and in 1932 Hitler appointed him the chairman of the Central Political Commission of the Nazi Party and SS General. In 1933, Hitler made him Deputy Fuhrer. Hess was influential in the Nazi Party and had roles in policies relating to domestic policy, party organization and security. He also had the role of warming up the audience before Hitler’s speeches.

When World War II broke out, Rudolf Hess importance dimmed slightly, but he was still in charge of the operation of the Reich Chancellery and remained as Hitler’s secretary. He did not agree with the plan to bomb and invade Britain. Then in 1941 Rudolf Hess flew solo across the English Channel and parachuted into Scotland. His reasons for the flight remain open to debate with some historians of the opinion he was intent on brokering an Anglo-German peace treaty. Other historians questioned his mental health. Hess was arrested by the British and interrogated.

After World War II at Nuremberg Hess was sentenced to life imprisonment (1946). He subsequently spent more than forty years in Spandau Prison, Berlin before committing suicide in 1987 at age 92.

Rudolf Hess married Ilse Pröh in December 1927. She was one of the first female students at Munich University and came from a family of wealthy physicians. She was also a member of the Nazi party. The couple had one child, a son, Wolf Rüdiger Hess (b.1937) and Hitler was his godfather.