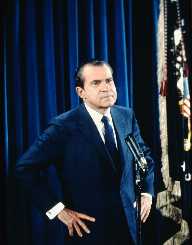 Richard Nixon was born on January 9, 1913, in Yorba Linda, California, USA. His parents were Francis Nixon and Hannah (Milhous), Nixon. He had four siblings: Harold, Donald, Arthur, and Edward.

The family was anything but rich, as they struggled with poverty since before Richard was born. The family lived on a ranch, which failed. Later, the family moved to Whittier, where Francis Nixon opened a grocery store, in hopes of bettering the family’s financial situation. Sadly, before Nixon was 21 years old, two of his brothers died.

Richard Nixon attended the Fullerton Union High School for his primary studies, but he later transferred to (and graduated with a high school degree from) Whittier High School. Richard was a bright student, and he was even accepted into Harvard. However, the family could not afford the tuition fees, so he instead attended the Whittier College.

At the college, he showed a promising skill in public speaking. His debate skills won him many arguments and even earned him the role of student body president. Later, he studied law at the Duke University School of Law, as this school offered him a full scholarship (unlike Harvard). He graduated from the law school in 1937.

After college, Richard Nixon was a lawyer for a short time but was bored easily. Instead, he signed up for the Navy. He could not engage in battle because he was a part of the Quaker religion (most of the followers of this religion believe in a policy of nonviolence).

Instead of fighting on the front lines, Nixon served as an aviation ground officer. He earned two service stars and rose to a rank of lieutenant. He resigned from the Navy in 1946.

Richard Nixon’s first political post was as the republican seat (for California) in the House of Representatives. Richard Nixon served as a member of the American Activities Committee. While in this post, he gained popularity after proving that Alger Hiss was working as a Communist spy. This discovery earned him a re-election in his House seat.

In the 1950’s, Nixon moved on from the House and earned a seat in the Senate. He ran an anti-communist agenda. This got him noticed by the presidential candidate, Eisenhower. Nixon joined him as his Vice President when he was elected. Nixon first ran for President in 1960 but did not win. This did not deter him from politics, though.

Richard Nixon served as the 37th President of the United States from 1969 to 1974. He was the first President to resign. During his career as President, he accomplished many important things, including ending the war in the USA and Vietnam and improving the relationship of the USA with the Soviet Union (currently Russia).

Richard Nixon was anything but a conservative President, but he did end revenue sharing to help ease the recession, priced controlled various government operations. He did create a supplemental Social Security income.

Nixon was thoroughly against racism and helped to integrate schools and other government-funded buildings. He also helped to fund NASA. On a less important note, he was also the first President to visit China. He did so after the Watergate Scandal in 1974.

Life After the Presidency

After the Watergate scandal, Nixon had little to nothing to do with politics. Instead, he traveled the world and wrote books about himself and what he had learned during his years working in the government.

Richard Nixon met Pat Ryan while the two were in college. They were married in 1940. The couple had two daughters together, Tricia and Julie. However, the marriage ended in 1993 when Pat died of lung cancer. The former President never remarried.

References in Television and Film

Richard Nixon is one of the most referenced Presidents of the 20th century in television and film. Many impersonators use his looks and voice in both live action and animated features. Some of the television shows and movies he has been referenced in are listed below.