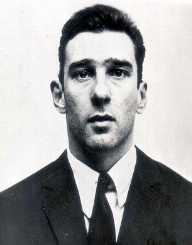 Reggie Kray was born on October 24th, in 1933. He, alongside his twin brother, earned recognition for being English criminals. Together, the pair ran an organized crime group during the 1950s and 1960s. Their criminal group was called The Firm.

Reggie Kray was born on October 24th, in 1933. His twin brother Ronnie Kray was also born during the same day. The two were born in Hoxton, East London. Their father, Charles David Kray worked as a wardrobe dealer. On the other hand, Violet Annie Lee was simply a homemaker.

Growing up, Reggie Kray was influenced by his grandfather to pursue boxing as his career. The two Kray brothers did their best in this field and that they achieved some recognition.

A few years later, in 1960, Reggie’s brother Ronnie was jailed for 18 months. Around this period, Reggie was gifted with a club called Esmeralda's Barn by Peter Rachman. The club helped Reggie Kray gain fame in the West End area.

The 1960s period brought profound fame to the two brothers as they were identified as charismatic nightclub owners. Their fame was not attributed to the criminal activities that they engaged in. Rather, they earned fame for associating themselves with celebrity figures such as Judy Garland, Barbara Windsor, George Raft and Diana Dors.

In 1965, Reggie Kray tied the knot to Frances Shea. However, the marriage was not successful as Shea took her life after two years of living together. Reggie wedded Roberta Jones as his second wife in 1997. The two had crossed paths when Reggie was in prison.

Reggie Kray passed away on October 1st, in 2000. Earlier that year, medical experts found out that he was suffering from terminal blood cancer. As a result of his illness, he earned himself a compassionate leave. He was 66 years old when he passed on. His twin brother Ronnie had died in 1995.