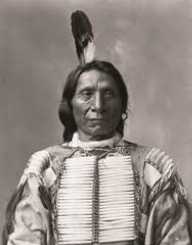 Red Cloud was an Indian resistance leader in the Red Cloud war against the U.S government. He was born in the year 1822. Cloud was an Oglala Lakota leader of one of the three Sioux groups. The Sioux group were Dakota, Lakota, and Nakota. These tribe formed part of the first inhabitants of the United States of America ( Native Americans).

Red Cloud was born in the year 1822 at the Platte River, North Platte in Nebraska. His father being Lone Man a Brule Lakota leader and his mother Walk As She Thinks an Oglala Lakota. Cloud was a tribal chief in his community. Old Chief Smoke his brought him up. He was chief from the year 1774 to 1864. It was after the death of his parents in the year 1825.

Cloud fought several wars while still too young living with his Uncle. It prepared him very much towards his task ahead. The United States government named the series of battles that Cloud lead his warriors to as Red Cloud wars. It included the 1865 opposition of the Cheyenne and Arapaho and the 1866 Fetterman Massacre. The Native Americans joined hands to fight the white U.S army. From the Massacre of the year 1866, the United States government formed a peace treaty to stop further wars.

Cloud formed part of the peace treaty by the U.S government on 29th April 1868. He later settled on the Red Cloud Agency in Nebraska in the year 1871. Red Cloud in the year 1874 persuaded with the White president on the issue of Gold. The discovery was on the Black Hills. The Sioux people treated this Hills as Holy grounds.

He was unable to make a peaceful conclusion to both his people and the U.S government. It leads to another war which he never formed part of it. His successor being Jack Red Cloud.

Cloud in the year 1884 got baptized as a Catholic Christian by Father Joseph Bushman. He had one wife Pretty Owl. Cloud and his wife later changed their name after baptism to John and Mary respectively. Together they had six kids namely Wears War Bonnet Red Cloud, Louise Red Cloud, Jack Red Cloud, Tells Him Red Cloud, Charges At Red Cloud and Come Back Red Cloud.

Cloud died on 10th December 1909 at the age of 87. They buried his body in Pine Ridge Cemetery.