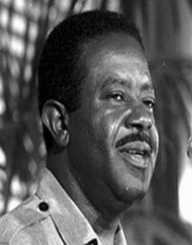 Ralph David Abernathy Sr. was born on March 11, 1926. He was an American minister and civil rights activist. He was one of the leaders of the Civil Rights Movement. Ralph was good friends with Martin Luther King Jr. Ralph was one of the founders of the Montgomery Improvement Association. This association played a significant role in the Montgomery Bus Boycott. He was also a co-founder of the Southern Christian Leadership Conference. Ralph was also a member of the advisory committee of the Congress on Racial Equality. He died on April 17, 1990, at the age of sixty four.

Ralph David Abernathy Sr. was born on March 11, 1926, on a farm in Linden in Alabama. He was born to William and Louivery Abernathy. He was brought up alongside eleven siblings. William was the first African American to vote in Marengo County in Alabama. He was also the first African American to serve in a grand jury. Ralph went to Linden Academy where he participated in his first demonstration. The demonstration was for the improvement of the livelihoods of his fellow students.

Ralph Abernathy later joined the United States Army and served to rise to the rank of Platoon Sergeant. After his discharge, he joined the Alabama State University where he was the President of the student council. As President, he led a hunger strike that demanded equality in the food served on the campus. In 1948, he became a Baptist minister. He graduated from the university with a Bachelor’s Degree in Mathematics in 1950.

In 1951, Ralph graduated from Atlanta University with a Masters of Arts Degree in sociology with Honors. In the same year, he became the Dean of Men at Alabama State University. He was the Senior Pastor of the First Baptist Church. He was a pastor at the church for a total of ten years.

In 1955, after the arrest of Rosa Parks for not letting a white man sit while in a bus, Ralph Abernathy, Martin, and other activists formed the Montgomery Improvement Association. The association organized the Montgomery Bus Boycott.

The boycott caught the attention of the nation. On December 20, 1956, the boycott ended after bus segregation was held to be unconstitutional in the case of Browder Versus Gayle by the United States Supreme Court. In 1957, there was a bombing at Ralph's home, but no one was hurt. His church was also bombed while the Civil Rights activists were having a meeting at the Southern Negro Leaders Conference on Transportation and No-violent Integration in Atlanta, Georgia.

In 1957, Ralph Abernathy became the Vice president of the Southern Leadership Conference. The conference’s name later came to be the Southern Christian Leadership Conference. The conference started voter registration drives for African Americans all over the South. The Freedom Riders, a part of the Civil Rights Movement, continued to advocate for the abolition of black segregation in Huntsville, Birmingham, and Montgomery.

In 1962, Ralph became the pastor of the West Hunter Street Baptist Church in Atlanta, Georgia. Martin and Ralph orchestrated peaceful demonstrations and travelled together. They were also in jail together seventeen times.

On April 4, 1968, Martin Luther King was shot while they were with Ralph. Ralph took him to St. Joseph’s Hospital in Memphis, but the pronunciation of his death came in the evening. Ralph became the President of the Southern Christian Leadership Conference. In 1968, he led the Poor People’s Campaign in Washington DC. The following year, he participated in a labour struggle in Charleston in South Carolina on behalf of hospital workers.

In 1973, Ralph Abernathy was a negotiator in the peace settlement at the Wounded Knee uprising between the Leaders of the Indian Movement and the Federal Bureau of Investigation. In 1977, he resigned from his post as President of the Southern Christian Leadership Conference.

In 1971, Ralph Abernathy had the privilege of addressing the United Nations on matters World Peace. He later became a member of the Board of Directors of the Martin Luther King Jr. Centre for Nonviolent Social Change. He later founded the Foundation for Economic Enterprise Development. He endorsed Ronald Reagan for the Presidency in 1980. In 1984, he withdrew his endorsement. In 1989, his autobiography titled ‘And the Walls Came Tumbling Down’ was published by Harper Collins.

Ralph Abernathy died on April 17, 1990, at Emory Crawford Long Memorial Hospital at the age of sixty four. His remains are in the Lincoln Cemetery in Georgia. His tomb had the inscription ‘I TRIED,’ and history surely remembers him.