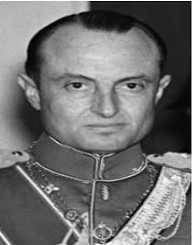 Prince Paul of Yugoslavia was born on April 27, 1893, in Saint Petersburg, Russia. He became a regent of Yugoslavia after the assassination of his first cousin Alexander I in 1934. In 1941, he was deposed by the Serbian military when they launched a coup after the signing of the Tripartite Pact.

When the Second World War ended, he was convicted of several war crimes and placed under house arrest. He traveled to Paris after his release. He died years later on September 14, 1976, in Paris, France.

Prince Paul of Yugoslavia was born on April 27, 1893, to Prince Arsen and Aurora Pavlovna Demidova. He was born in Saint Petersburg, Russia and was the only son of his parents. His father was the brother of King Peter I and also a Prince of Yugoslavia.

At birth, his parents named him Paul Karadjordjevic before he became Prince of Yugoslavia. He went to the University of Oxford and joined the Bullingdon Club at the university. The club belonged to members from wealthy backgrounds. In 1939, he became the Knight of the Garter.

On October 9, 1934, Prince Paul's first cousin Alexander I, regent of Yugoslavia, was assassinated in Marseille, France by Vlado Chernozemski. Alexander had written in his will that upon his death his council of regents would take over the regency until his son was of age. Since his son Peter II was only eleven years old, Prince Paul became the regent of Yugoslavia in his place.

In his leadership, he embraced democracy rather than Alexander's dictatorship rule that had burdened the people. In 1939, he visited Berlin after receiving an official invitation from Adolf Hitler where he stayed for nine days.

When the Second World War broke out, the Yugoslavian state declared that it would play a neutral part in the war. Prince Paul as head of state tried so hard not to involve himself in the war.

His focus was to preach peace between the Serbs and Croats who were at war with each other. With the pressure from his allies to join in the war, he became reluctant fearing that war would erupt in Yugoslavia.

In 1941, after much pressure from the Germans, Yugoslavian Prime Minister Dragisa Cvetkovic signed the Tripartite Pact. With the treaty, the German soldiers got permission to pass through Yugoslavia. The Serbs were not impressed by the signing of the pact.

They later started a military coup in Yugoslavia led by General Dusan Simovic. The coup led to the deposition of Prince Paul as regent of Yugoslavia. Afterward, he fled to Greece with his family a few days before the German invasion in Yugoslavia.

By the signing of the pact and fleeing his country, Prince Paul became a traitor to his country. When the war ended, the British soldiers captured him. They later convicted him of several war crimes.

Prince Pau was placed under house arrest together with his family in Kenya and later transferred to South Africa. After he was freed, the communist government in Yugoslavia denied him and his family entry into the country. He took his family and moved to Paris, France where they settled.

Prince Pau married Princess Olga of Greece and Denmark in 1923 in Belgrade. The couple had three children namely Prince Nicholas, Prince Alexander, and Princess Elizabeth. He spent his later years in Paris with his family where he died on September 14, 1976.

He died at the age of eighty-three. Paul is buried in Lausanne, Switzerland. His body was later moved to Serbia with permission from the Serbian government in 2012 to be buried with state honor.