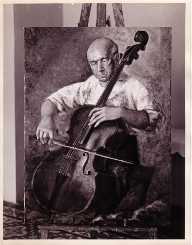 Death overtook our beloved Pablo Casals musical talent, but his legacy is still visible to date. He dominated the 20th-century world where he went on and became a great cellist. He was lucky to have free musical training under his dad’s skills who was a great choirmaster. At 11 years old, he played a violin, flute, and piano. He loved to listen to a cello tune till the end. That’s why he got interested in the said instrument, and he opted to up his career. His aspiration and devotion gave him a chance to eradicate poverty in his life.

On December 29, 1876, Pau Casals I Deffillo was born in El Vendrell Catalonia in Spain. His father Carlos Casals I Ribes was a choirmaster professor. From his tender age, his father showed him the right way of living. I guess his discipline worked marvelously since Pablo remained to be an obedient child. In that case, it was quite easy for his father to teach him how to play countable instruments such as organ, violin, and piano. At four years old, he learned to play the violin, piano, and flute. For outstanding performance, he mastered to play the violin for two years. But there is one instrument that stole his heart in music industry.-the Cello. His first heard its actual sound when he witnessed a Catalan musician who loved to play the same device. He was inspired to the point of making a professional career of the said instrument.

To improve his urge and need for music, Pablo Casals attained his cello training in 1888 where he joined Escola Municipal de Musica. After two years of search and fail, he found an old copy of most performed cello suites by Johann Sebastian Bach in Barcelona’s musical store. For a decade, Pablo ate and drank the cello suites with the aim of mastering every stanza. He later performed in Barcelona in 1891.

In the close of his graduation, Pablo Casals was selected to chair the Escola Municipal de Musica as well as the principal cellist seat in one of the Barcelona’s orchestra house known as the Liceu. That’s where he started to perform for the prominent personals. His zeal and determination made him garner the Presidential Medal of Freedom as well as the U.N Peace Medal.

In the mid of 1897, he made his career known by performing as a soloist with Madrid Symphony Orchestra. In 1899 his global career began when he showcased his skills in London. In the mid of the same year, he was given a chance to play for Queen Victoria and Ernest Walker at the so-called Osborne House. He later performed at the Lamoureux Concert in Paris where he received conclusive reviews.

His envied oomph style garnered him a proposal to play at for President Theodore Roosevelt in 1904.He also got a chance to play at the Carnegie Hall in New York. His immense popularity and stance brought him to the public eye. He became an enemy of defeat and rejection, but invitations and dominant traits followed him. He was later seen at the London Music Festival and the following day at the Queen’s Hall.

His musical calling made his return to Paris where he formed a cellist group with Alfred Cortot, pianist, and Jacques Thibaud, a violinist. But the team ended after five years. He later founded a symphonic band in 1919, but it was later discontinued due to the 1936 Spanish War. He then performed at the Grand Theater del Liceu. From 1950 to 1966 Pablo served as a cellist and conductor at the Prides Festival. He then moved to Puerto Rico to celebrate a one year Casals Festival. Over the next years, Casals opened his Orchestra titled Purto Rico Symphony in 1958.By the end of his musical career, Casals served as a teacher where he taught his vocal lessons across the globe.  He performed his last composition the Hymn of the United Nations in 1971

From 1897 to 1973, Pablo Casals gained various recognitions such as the Order of the Carlos III, Medal of Freedom and the U.N Peace Medal. Casals first dated Guilhermina Suggia, a cellist. After partying ways with his lover, he tied a long-term knot with a singer, Susan Metcalfe. But they later parted ways after ten years of courtship. She later married Francesca Vidal de Capdevila, but she later died in 1955.

After two years, he married Marts Martinez where they lived happily ever after. Pablo Casals was last seen alive in 1973 in Puerto Rico at 96 years old. He was honored with a Grammy Lifetime Achievement Award in 1989. Not to mention an International Pablo Casals Cello Competition was launched in 2000. Further; the annual Casals Festival is greatly admired till today.