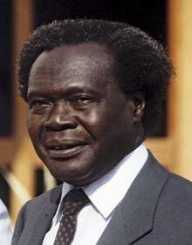 Apollo Milton Obote was born December 28, 1925, in Akokoro village, Apac, northern Uganda. He was the son of Stanley and Puliska Opeto. Opeto was a traditional chief of the Lango tribe in Uganda. Obote grew up in Akokoro with his other ten siblings.

He started his education in a missionary school at Ibuje Primary School. After his primary, he went to Busoga College located in Jinja, Busoga Kingdom. He did his secondary education and was admitted for a degree course at the Makerere College. Obote studied Makerere College School of Economics. He was expelled from the college after leading the students in what the administration termed as unlawful political activities.

Obote unsuccessfully tried to secure educational scholarships to complete his studies in the US and Germany. His efforts were thwarted by the British administration on every occasion. He later completed his degree studies through an overseas correspondence program. From his time in school into his expulsion, Obote was actively involved in political movements. He was a student leader in secondary and in the university.

He got a job as a clerk in the Mowlem Construction Company. He stayed in Uganda for a while. He got a transfer to Kenya as a clerk. While in Kenya, he got involved in the local political agitation for independence. He joined the local political outfit Kenya African Union. This party was led by Jomo Kenyatta, the future founding prime minister and president of independent Kenya. As a foreigner in Kenya, Obote was confined to his work environment. He soon entered the trade union movement. He became a lead trade unionist agitating for better labor and working conditions for workers.

The British administration took notice of his activities in Kenya. Kenya was in a state of anarchy due to the struggle for independence led by the MAU MAU freedom movement. The British did not want another battlefront in East Africa.

In 1957 he returned to Uganda and joined in the advocacy for independence. He joined the Uganda National Congress or UNC. He became the vice chairman. In 1958 Obote replaced the member of Legislative Council for Lango upon his death. In 1960 Obote formed the Uganda People’s Congress. He formed an alliance with the powerful Kabaka Yekka Party. With the support of the predominantly Buganda supported party, Obote won the first independence elections. Obote became the powerful prime minister, while the Buganda King Edward Muteesa became the ceremonial president.

In 1966 Obote fell out with King Muteesa. Ugandan troops stormed the king’s palace in Kampala forcing Muteesa to flee to exile. In 1967 Obote signed in a new constitution and assumed the all-powerful presidency. His socialist reforms angered the western powers.

On January 25, 1971, Idi Amin, the head of the Ugandan army deposed Obote while he was in Singapore. He returned to Tanzania for a while. On April 11, 1979, Ugandan rebels aided by the Tanzanian army invaded and overthrew Amin. Three presidents ruled Uganda before elections were held. In the 1980 bungled elections, Obote won and was sworn as president again.

He used his second term to pacify his political enemies. He led a systematic campaign against the Buganda who hated him and Amin’s Acholi tribe. In 1981 a bloody civil war erupted. In the Ugandan Bush War, Obote was fighting three different groups. When General Ojok, the army chief died, Obote replaced him with a junior ranking officer from hi Lango tribe. This move divided the army. Obote left out the General Basilio Olara Okello. General Okello was an Acholi from Amin’s tribe.

On July 27, 1985, General Okello led the Ugandan army to overthrow the government of President Milton Obote. He fled Uganda to Kenya, then to Zambia where he spent the rest of his life. General Okello did not rule for long as president. He was overthrown by another army officer Brigadier Museveni Kaguta Yoweri, who fought in the Ugandan Bush War.

Milton Obote died of kidney failure while seeking treatment in Johannesburg, South Africa. He died on November 28, 2005. His body was returned to Uganda and given a state burial by the Ugandan government in his Apac hometown.

Apollo Milton Obote is a debatable figure. Some say he did his best to maintain the unitary system in the Ugandan nation. Others revile him for disbanding the traditional kingdoms that were a source of pride and identity to most Ugandans.