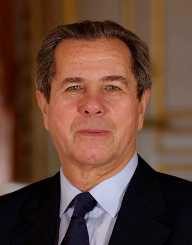 Michel Jean-Pierre Debre was the first Prime Minister of the French Fifth Republic.

Michel Jean-Pierre Debre was born on 15 January 1912, in Paris. He was the oldest child of parents Robert Debre and Jeanne Debit-Ponson, he has a sister and a brother. After his mother’s death in 1929, his father Robert married Elisabeth de la Panouse, who had six children from her previous marriage.

Michel Jean graduated from Ecole Libre des Sciences Politiques with a diploma in law, moving on to a doctoral degree in the same subject from the University of Paris.

He went on to pass the auditor examination for the Council of State in 1935, the twenty-two-year-old had the top score in the test, becoming a member of the Conseil d'État.

Michel Jean was a member of École des Officiers de Réserve de la Cavalerie and was mobilized in 1939 during World War II. He was caught by the Germans at Artenay in 1940 but managed to escape.

He managed to return to Conseil d'État (Council of State) for Vichy regime, taking an oath to Marshal Philippe Pétain.

When the Germans invaded free zone, Michel Jean was part of the resistance Fontevrault in Morocco, under François Jacquier.

Michel Jean was charged to reform the French Civil Service in 1945, where he drafted statutes for Ecole Nationale d’Administration (National School of Administration), guided by the Jean Zay’s idea before World War II.

He wrote and published The Death of the Republican State in 1947.

During the Fourth Republic’s power, on the advice of his idol General de Gaulle, Michel defected from Democratic and Socialist Union of the Resistance to Radical-Socialist Party.

After defeat in 1946 from the legislative elections in Indre-et-Loire, Michel Jean joined Rally of the French People. In 1947, Michel headed the German and Austrian desk in the Foreign Ministry.

Michel Jean was made senator of  Indre-et-Loire in 1948, a position he held for ten years. He founded Le Courrier de la colère in 1957, a newspaper that opposed to Algeria gaining independence.

When Charles de Gaulle became the President for the Fifth Republic, Michel was appointed Minister of Justice in 1958.

Michel Jean played a pivotal role in drafting the Constitution for the new republic, aiming to keep Charles de Gaulle in power. In 1959, Michel Jean- Pierre Debre was the first Prime Minister of the Fifth Republic.

After the 1962 Évian Accords referendum, Michel Jean was replaced with Georges Pompidou, as he had opposed to Algeria gaining independence. He then tried unsuccessfully to be elected deputy for Indre-et-Loire in the same year.

Michel Jean moved to Réunion Island and won leadership by local right in 1963, despite a movement to remove its position as an overseas department earlier.

Michel Jean tried to stop its citizens from seeking independence, which he did by implementing policies and pushing for French schools.

Michel Jean even relocated children to Creuse, France on an excuse of repopulating metropolitan departments.

Michel Jean was still active in politics, becoming a Minister of Economy and Finance in 1966. After the Grenelle Crisis in May 1968, Michel was shuffled to Foreign Ministry for a year.

In 1969, Michel Jean served as Defence Minister in President Georges Pompidou’s cabinet until 1973. In 1980, Michel lost the presidential election to Valéry Giscard d'Estaing, collecting only 1.6% votes.

In 1988, Michel Jean was elected to take the first armchair of Académie française (French Academy). The body is an official advisory body for the French language.

Michel Jean Michel married Anne- Marie  Lemaresquier in 1936 and had four sons. His son Jean- Louis was President of the National Assembly of France from 2002 to 2007, and then President of the Constitutional Council from 2007 to 2016.

After his retirement from politics, Michel Jean wrote and published his memoirs. Michel Debre passed away in his home Montlouis-Sur-Loire on 2 August 1996, from Parkinson’s Disease. He is buried in the cemetery of Amboise.

Michel Jean was awarded Commander of the Legion of Honor, ‘Croix de Guerre

and the ‘French Resistance Medal. Mostly for his services to the French people.