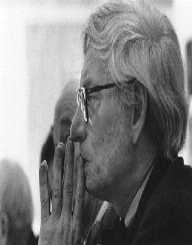 Louis Kahn was born to a Jewish family of humble means in Estonia in the year 1901. He grew up in the region of Saaremaa and specifically in Kuressaare, a town in the Parnu province. Louis Kahn's family immigrated to America when he was barely five years old in the midst of their penury. At this time, Louis suffered injuries to his face when he made use of twigs to draw, and this led to facial burns. The family had to augment their sustenance by selling the drawings made by Louis.

Louis Kahn also learned to play the piano and started performing in silent movies at the cinemas to earn money. By the year 1914, he adopted a new moniker, Kahn and became known as Louis Kahn. His ability to create images was noticeable as a child, and he was able to excel in several competitions by coming out in the top position.

Louis Kahn's excelling in the arts led him to study architecture in 1924 at the University of Pennsylvania.

Louis Kahn left university upon graduation and was given employment at the office of John Molitor. Louis Kahn became a senior designer at this architectural office and over the next few years, he embarked on a tour of Europe. When Louis returned in the year 1929 to America, he went on the role of Paul Philippe Cret and worked in the next few years here. He moved on to the state of Philadelphia and joined the firm of Zantzinger, Borie, and Medary. Louis's focus in the following years got reinforced when he worked with others to establish the Architectural Research Group in the year 1932.

Louis Kahn presented ideas to the local authorities over the next few years on pre-fabricated systems for public housing, and the proposal sailed through.Louis collaborated with George Howe over the course of the next decade to enlarge public housing in the state of Philadelphia. As the decade of the 1940s got on to a close, he joined Yale University as a lecturer. Louis Kahn's tentacles got enlarged by 1950 when he joined the Rome based American Academy as Architect- in- Residence. He used the platform to visit and examine ancient relics across Italy, Greece, and Egypt. His style depicted by his designs took on a hue reminiscent of the outgone contemporary movements.

Louis Kahn's mass appeal gathered momentum when he bagged his first major to design the Art Gallery at Yale University. This work was primarily seen as one of his notable and premiere designs in his lifetime. This came as the 1950s dawned and added the University of Pennsylvania commission to design the Richards Medical Laboratories, later on, cemented his acclaim.

Louis Kahn's approach to the Richard Medical Laboratories project was epochal as it led to the emergence of column-free towers of nascent outlook. He differentiated between served and servant spaces for this project.Louis's outline for the staircase and enclosures all seemed stacked in chimneys around the entire complex. The design had a close semblance to San Gimignano towers he designed previously.

Louis Kahn has his place without a doubt in the evolution of modern architecture. His works come with defining qualities that are several and identifiable in many respects. It is a tribute to Louis Kahn's scholarly work that he became the MIT Professor of Architecture and Planning in 1956 to occupy the Albert F. Bernis chair. He became known as the brick-whisperer and list of his completed designs is replete with institutional complexes of enormous dimensions.

Louis Kahn's design came to life as building for the Salk Institute laboratories in the state of California. His eye-catching design replete with brick colonnades at the Indian Institute of Management in Ahmedabad as well as the concrete fortress in Bangladesh for the National Assembly is evidence of his architectural mastery. He also designed the Four Freedom Park named after Franklin D. Roosevelt as well as the Phillips Exeter Academy Library. The Flora Lamson Hewlett Library was his last project, and it was completed in the year 1979.

The designs of Louis Kahn did not necessarily align with the idea of form and function or the predictability of the evolving technology-based inputs that evolved in his era. He built his ideas around the ideals of monolithic masonry that celebrated weighty art forms. The edge of Louis designs came from semi-circles templates along with triangles, great circles and other primary geometry that cut the look of a dateless and somewhat sinister aura. The catch Louis Kahn's designs struck the discerning mind as relics of a cosmic civilization that is yet unfolding. While all the trappings of his work drew largely on the ancient civilizations, his signature designs reminded the observer of Greece, Rome, and Egyptian art forms.

It might be right to hold the view that the trail of his visits across vistas of the ancient world early on in his career showed up in his designs. Louis Kahn successfully married the ideas he gleaned from observing the ruins of ancient civilizations and fused them into the concept of modernity. The other possible influences on his work could have been the outline of buildings found around his district in Philadelphia in his early years. There were huge brick buildings that housed factories and other projects in the area. They were denominated with large windows that were largely obvious and weighty. His early works could be seen in this light.

Louis Kahn got married to Esther in the year 1930. The union produced a girl child. He had Alexandra Tyng from his relationship with his collaborator Anne Tyng. He had a third child- a son with a lady named Harried Pattison.