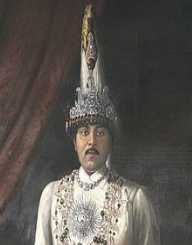 Jung Bahadur’s father, Bal Narsingh Kunwar, defended the honor of Rana Bahadur Shah when he was murdered. Due to killing the murderer, he was given the position of Kaji. The position was endowed upon the family and made to be hereditary.

Jung Bahadur Rana joined the military in 1832. When his grandfather, Bhimsen Thapa fell from power, Jung Bahadur Rana lost his land and his job. He went to the north of India for several years and returned to Nepal in 1840. He had risen through the ranks to become a captain by the time he arrived back.

He took up a position in the King’s bodyguard in 1841, and in 1842, moved into the position of Kaji, as inherited from his father. His uncle, Mathbar Singh Thapa returned to power but disliked what he saw to be the ambition of Jung Bahadur Rana so removed him to a less important position.

When Fatah Jung Chautaria took over the reign, Jung Bahadur was fourth in line of the government. The Queen was also trying to have him removed so that her son could be installed as Prime Minister.

Jung Bahadur Rana bided his time. The conspiracy eventually came out, and the participants executed. The Queen was sent into exile, along with her husband, King Rajendra. In 1847, Jung Bahadur Rana installed Rajendra’s son on the throne, and Rajendra was captured and put under house arrest for the rest of life.

By 1950, Jung Bahadur Rana had everything in place. He had family and friends occupying all the important positions in government and had his preferred person on the throne. On top of that, all important decisions were decided upon by himself as the Prime Minister.

Jung Bahadur Rana went on a ten-month tour abroad in 1850-1851, visiting France, Egypt, and Britain. He believed that Nepal could become independent by continuing good relations with Britain.

He had the dharma texts revised, which resulted in a book that set out legal parameters on a wide variety of issues for both criminal and civil matters, and how disputes of all types were to be handled. It also included how punishment was to be meted out, which was toned down considerably from the original laws.

Upon return from his overseas trip, Jung Bahadur Rana made several changes to make sure he had complete autonomy in running the country.

He confined the King to his palace, with only immediate family allowed to have access. In 1856, a royal decree was issued, stating that the Prime Minister would have authority over all internal administration. It also decreed that Jung Bahadur Rana would be King (Maharajah) of the Kaski and Lamjung districts. Last, but not least, the position was made hereditary, ensuring Jung Bahadur’s family would remain in power. Jung Bahadur Rana was second in power, only behind the King.

Jung Bahadur Rana had very cleverly created a monarchy within a monarchy. The situation was further cemented when the King’s children and Jung Bahadur’s children, began marrying.

When the British took control of India in 1858, they remained firm allies of the Nepalese for many years to follow. Also in 1858, the King bestowed the title of Rana upon Jung Bahadur Rana. He continued as Prime Minister until 1877, maintaining control and suppressing any unrest that looked like breaking out.

Jung Bahadur Rana had several awards and honors bestowed upon him. Some of these included:

1873:   Knight Grand Commander of the Order of the Star of India

One of his senior wives was Bada Maharani Hiranya Garve, with whom he had four daughters, who were all married eventually to royal princes.