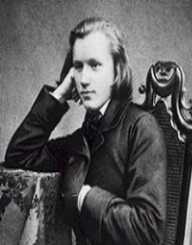 Johannes Brahms was a German composer and a pianist of the Romantic Period.

Johannes Brahms was born on 7 May 1833 in Hamburg to the father, Johann Jakob Brahms, and mother, Johanna Nissen. Johann was then a musician from Heide, a double-bass player in the Hamburg Stadttheater and the Hamburg Philharmonic Society. Johannes had older sister Elisabeth and a younger brother Fritz Friedrich.

Johannes Brahms had his early musical training from his father, although nothing had been noted about his formal schooling. Johann taught his son basics of violin and cello. At the age of seven, he took piano lessons from Otto Friedrich Willibald Cossel.

There he made his debut as a performer in a private concert including Beethoven's quintet for piano and winds Op. 16 and a piano quartet by Mozart. In 1845, he composed piano sonata in G minor, but his parents felt that he would be better off being a performer than a composer. At the same year, he learned piano from Otto’s teacher Eduard Marxsen.

Marxsen taught Johannes about the tradition of composers such as Beethoven, Mozart and many more, and ensured that Brahms's compositions were grounded in that tradition. In 1847, Johannes Brahms made his first public appearance as a solo pianist in Hamburg. He played his full piano recital in 1848, included a fugue by Bach, works by Marxsen and contemporary virtuosi such as Jacob Rosenhain.

In 1850, Johannes Brahms met with the Hungarian violinist Ede Reményi, and there Johannes learned "gypsy-style" music such as the czardas. The two went on a concert tour until 1853, when they parted ways after Johannes slept during Liszt's performance.

In 1853, Johannes Brahms met violinist virtuoso and composer Joseph Joachim at Hanover. Johannes played some of his solo piano pieces for Joachim, winning him over. Later in October, he visited Dusseldorf, armed with a letter of recommendation from Joachim.

Robert Schumann was impressed with Johanne’s talent that he published an article entitled "Neue Bahne" ("New Paths") in the 28 October issue of the journal Neue Zeitschrift für Musik, praising Brahm’s talent and promise. Johannes participated with Schumann and Albert Dietrich in writing a violin sonata for Joachim. The "F-A-E Sonata," were initials of Joachim's motto Frei aber einsam ("Free but alone")

There are clashing reports that Johannes Brahms played piano in bars and taverns to help supplement his family income when he turned thirteen. As the Brahms family are relatively wealthy, and Hamburg had strict laws against minors in taverns and brothels.

Johannes Brahms began composing in addition to his piano recitals. He had admitted to publishing compositions Scherzo Op. 4 and the song Heimkehr Op. Seven no. 6. Johannes published his work using Hamburg firm of Cranz in 1849, under pseudonym 'G.W. Marks'.

After Schumann’s article, Brahms went to Leipzig to publish his Opp. 1–4 (the Piano Sonatas Nos. 1 and 2, the Six Songs Op. 3, and the Scherzo Op. 4) via  Breitkopf & Härtel publisher. Bartholf Senff published the Third Piano Sonata Op. 5 and the Six Songs Op. 6. In Leipzig, he gave recitals including his own first two piano sonatas, but returned to Dusseldorf in 1854, after Schumann was committed to a mental sanatorium for attempted suicide.

Schumann died in 1856; Johannes Brahms helped his widow Clara Schumann and family until their oldest daughter took charge of the household After Op. 10 Ballades for piano, Johannes Brahms took a break until 1860, as he had become more ambitious. In 1857, through Clara Schumann, he became a musician in the court of Detmold, the capital of the Principality of Lippe. In Hamburg he established a women's choir, he wrote and conducted the music himself.

In 1863, Johannes was appointed conductor of the Vienna Singakademie. He found that the post as the conductor took too much time, he left the choir in June 1864. After that, he spent his time in Baden with the Schumanns during summers until 1876. After the death of his mother in 1865, Johannes began his famous work A German Requiem (Ein Deutsches Requiem) Op. 45, completing it in 1866.

He became director of the concerts of Vienna Gesellschaft der Musikfreunde (Society of Friends of Music) from 1872 for three years. He ensured that the orchestra was staffed by professionals, and avoided repertoires from “New German School. “

He had composed 122 songs with Opus numbers. Johannes Brahms frequently made corrections to his works. And around 200 songs since his days in women’s choir onwards. He wrote songs for piano, bass, violins and wind instruments. Johannes had written many styles of songs, drawing inspiration from many things.

The University of Breslau (now the University of Wroc?aw, Poland) conferred an honorary degree to Johannes Brahms on his composing works in 1879. He wrote the Academic Festival Overture, which was published in 1881, based on various German student songs.

Johannes Brahms was briefly engaged to Agathe von Siebold in 1859, but the engagement was soon broken off. There were rumors that he and Clara Schumann were an item, but he respected his friend Robert. Johannes and Clara remained close friends until her death in 1896,

Johannes Brahms died in Vienna, in April 1897, of cancer. He was 63 years old. He was buried in the Zentralfriedhof in Vienna. The monument over his grave was designed by Victor Horta and was sculpted by Ilse von Twardowski-Conrat.

Johannes Brahms was a humanist/ atheist. Vier ernste Gesänge (Four Serious Songs), was inspired by both the Hebrew Bible and the New Testament.