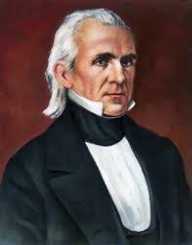 James Polk was an American politician who served as the 11th President of the United States.

James Knox Polk was born near the town of Pineville, North Carolina, on November 2, 1795. His father, Samuel, was a wealthy farmer and county judge. His mother’s name was Jane Knox. He had nine younger siblings.

He had several health problems during his childhood. When he was eight years old, his family moved to Maury County, Tennessee.

James Polk began his education at the Presbyterian Academy. In 1813, he enrolled at the Zion Church Academy. He then joined the Bradley Academy in Murfreesboro. In 1818, he graduated from the University of North Carolina at Chapel Hill. He then started studying law in Nashville in the office of attorney Felix Grundy. He passed the bar exam in 1820.

From 1819 to 1822, James Polk was a clerk in the Tennessee State Senate. After passing the bar, he opened up his own law office in Maury County. In 1822, he became a member of the Tennessee House of Representatives. In 1824, he was elected to the U. S. House of Representatives and moved to Washington, D. C. He was re-elected six times. In 1833, he became the chairman of the Ways and Means Committee.

Two years later, he became Speaker of the House. In 1841, he returned to Tennessee and unsuccessfully ran for Governor. He ran again in 1843, but he was defeated for the second time.

James Polk initially planned to run for the position of Vice President of the United States. He eventually ended up running for President, and he managed to defeat his opponents. He entered the White House in 1845. During his presidency, he annexed Texas and led the Mexican-American War. He re-established the Independent Treasury System and lowered the tariffs on imported goods. After his term ended in 1849, he refused to seek re-election.

In 1824, James Polk married Sarah Childress, the daughter of a prominent merchant. She often advised him on policy matters and helped him with his speeches. As First Lady, she hosted several events in the White House. The two of them had no children. It is assumed that Polk’s childhood health issues made him infertile.

James Polk contracted cholera and passed away on June 15, 1849. He was 53 years old. He was initially buried at the Nashville City Cemetery. A year later, he was reburied in the yard of his home. In 1893, his remains were transferred to the grounds of the Tennessee State Capitol.

In 1922, Author Eugene McCormack released the book James K. Polk: A Political Biography. There is a statue of Polk located at the North Carolina State Capitol.