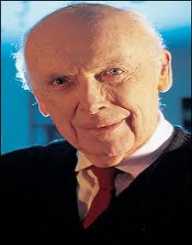 James D. Watson is a biophysicist and geneticist. He is famous for the discovery of molecular DNA structure. Together with Maurice Wilkins and Francis Crick, he won the Nobel Prize.

James Dewey Watson was born in Illinois on 6th April 1928. He was the only child of James D. Watson, a businessman, and Jean Watson. He was raised from a Christian background particularly Catholic. His father, however, was a non-believer in religion.

He spent most of his early life in Chicago. Watson later attended Horace Mann Grammar School before moving to South Shore High School.

His initial dream was to be an Ornithologist since he loved birds just like his father. He later enrolled in the University of Chicago under a tuition scholarship courtesy of Robert Hutchins.

In 1946, James D. Watson's ambition of becoming an Ornithologist changed after reading a book What is Life? He wanted to study genetics.

He earned a BS degree where he majored in Zoology in 1947 from the University of Chicago. The presence of Hermann Joseph Muller, a Nobel Prize Winner at the University of Indiana attracted him to enroll in the university in 1947.

Under the supervision of Salvador Luria, James D. Watson earned his Ph.D. degree in 1950 from the University of Indiana.

After completing his Ph.D., James D. Watson moved to Copenhagen for his postdoctoral studies where he did his research with Herman Kalckar a biochemist. He later joined Ole Maaløe where they worked on bacterial virus where they wanted to find out the structure of the DNA.

Through John Kendrew, he moved his research to the University of Cambridge where he found a better infrastructure that could help in his research.

The duo's breakthrough in discovering the structure of the DNA came in 1953. They put up ma double helical configuration resembling a climbing ladder. They explored how a DNA would duplicate itself. This discovery answered a fundamental question that every biologist sought to explain.

Crick and Watson later published their findings in Nature, a British Journal in 1953.

James D. Watson relocated to Harvard University in 1955 where he was a lecturer of biology and did various sciences research for 15 years. During his time in Harvard, he wrote a book, Molecular Biology of the Gene, a book that has gone on to be one of the most used by biology students.

A condition of one of his sons had motivated Watson to discover the Human Genome Project; he saw through the division of genes in the human chromosomes. Our genomes will help discover and prevent an upcoming disease. This will also prevent the generalization of illness.

In a statement made via The Time Magazine, James D. Watson made a statement that was considered highly racist about the African race. He resigned from the job following his speech. He later announced his retirement. He later apologized for his statement.

His move to auction his Nobel Prize stirred critics from various quarters. He, however, defended himself stating that the money from the auction was to be used in scientific research.

In 1968, James D. Watson got married to Elizabeth Lewis. The couple has two children together. One of his son Rufus has schizophrenia.

In 1962, their work in science was recognized when James D. Watson and Francis Crick jointly received a Nobel Prize. His colleague had however died of cancer. Apart from the Oscar Award, in 1959, James D. Watson received John Collins Warren Prize of the Massachusetts General Hospital.