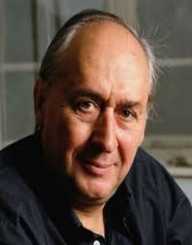 J. G. Ballard was a British author of novels and short stories.

James Graham Ballard was born in the Shanghai International Settlement, on November 15, 1930. His father was a chemist and the chairman of the China Printing and Finishing Company. His mother’s name was Edna. He had a younger sister. He studied at the Holy Trinity Church School. In 1943, he was sent to the Lunghua Civilian Assembly Center with his family.

That was an internment camp that the Japanese government set up for Europeans and Americans. He was released from the camp in 1945, and he moved to the United Kingdom. There, he studied at The Leys School. After that, he enrolled at the University of Cambridge to study medicine.

He later dropped out, and he enrolled at the Queen Mary College to study literature. He then got kicked out, and he joined the Royal Air Force. He spent a year at a flight-training base in Canada before returning to London.

J. G. Ballard first won a prize for an essay in high school. In college, he won a prize for a short story, called “The Violent Noon.” It was published in Varsity, the oldest student newspaper at the University of Cambridge. After that, he got a job as a copywriter for an ad agency. In 1956, two of his short stories were published in literary magazines. In 1958, he became the assistant editor of Chemistry and Industry, a scientific journal.

Ballard decided to become a full-time writer in the early 1960s. In 1962, he published his first two novels – The Wind from Nowhere and The Drowned World. In 1969, he released a collection of short stories, called The Atrocity Exhibition. The stories talked about different political events in the U. S. in a very explicit and controversial way. The book was banned by certain publishers, and some of the copies were destroyed. He wrote several other novels and stories over the next few years, including Crash, Concrete Island, and High Rise.

In 1984, J. G. Ballard released Empire of the Sun. It became his most successful novel, and it ended up on many bestseller lists. The plot was based on his experience in the interments camp during World War II. In 1987, director Steven Spielberg created the film adaptation of the book, with the lead role played by actor Christian Bale.

Ballard continued his writing with novels such as Rushing to Paradise, Super Cannes, and others. He also published the collections War Fever, Memories of the Space Age, and The Voice of Time. Several of his short stories were adapted into TV films by BBC. Shortly before his death, he wrote the autobiography Miracles of Life. After his death, his literary agent published a few of his unfinished works.

J. G. Ballard won the James Tait Black Memorial Prize, the Guardian Fiction Prize, the Commonwealth Writers’ Prize, and the Golden Pen Award. He received honorary doctorates from De Montfort University and the Royal Holloway University of London. In 2003, he was chosen to receive a title from the Most Excellent Order of the British Empire. He refused to accept it because he did not want to support the monarchy.

J. G. Ballard was one of the most prominent figures in several subgenres of science fiction. He influenced writers such as Lee Killough and Terry Dowling. He also influenced musical groups such as Comsat Angels, Manic Street Preachers, The Creatures, and others.

In 1955, J. G. Ballard married a woman named Helen Mary Matthews. They had three children together – Bea, Fay, and James. His wife suddenly passed away in 1964. A few years later, he met a woman named Claire Walsh. She remained his partner for the rest of his life, even though they never got married.