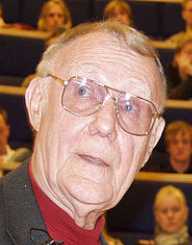 Ingvar Kamprad always had an eye for sales. As a young man, he bought small items, like matches, at wholesale prices. He would later sell these for a small amount of money more than he got them for. Once he realized that he could make a decent amount of money from buying wholesale, he started to sell other ideas.

He sold seeds, school supplies, and knick-knacks. It didn’t take long after realizing that he was an excellent salesman that he decided to start his own legitimate business.

IN 1943, Ingvar Kamprad started his new business, which he called IKEA. The store was not much like the IKEA that exists today. At first, Kamprad made catalogs of items that he was selling and had customers send in a mail-order for what they wanted to buy. He still sold smaller items at first, not selling anything much larger than a picture frame.

It wasn’t until 1948 that IKEA started to sell furniture, which is what it is best-known for today. Since the business was now selling larger items, Ingvar Kamprad didn’t just sell things through the post. He got his own moving trucks, which would deliver purchases in Sweden. Some deliveries, which were further away, were transported via train. Through the rest of the 1940’s, the company grew famous, especially its furniture.

In 1950, IKEA no longer focused on selling small objects. Instead, the business was concentrating on selling furniture. Even though the business was now selling large objects, it was still mostly run as a mail-order business. That changed in 1953 when Ingvar Kamprad decided the business should have a storeroom. Having the storeroom made the business much more popular, in part because people could see what they were buying in person instead of in a catalog.

In 1956, IKEA put out what it would become most famous for easily-assembled furniture. The furniture was sold in a deconstructed way to save on space and packaging. Now, most all of IKEA’s furniture is sold in this way.

The Stichting INGKA Foundation was founded in 1982. The goal of the foundation is to promote the development of interior design and architecture. At least, that was the goal when the foundation began. Since then, the foundation has given to many other causes, including helping children in need. The foundation is one of the most generous foundations in the world, giving millions of euros each year.

Ingvar Kamprad has been married twice in his life. Little is known about his first wife, as he liked to keep his personal life private. However, his second wife was Margaretha Stennett. Little about the end of this marriage is known. Since Kamprad is so old, is it likely that his second wife has died. He was four children from his marriages: Annika, Jonas, Mathias, and Peter.