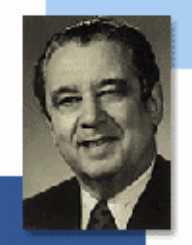 American academic and chemist Herbert C Brown was born to Charles Browarnik and Pearl Gorenstein on the 22 May 1912 in London, England. His parents had immigrated to the UK from Zhitomir in Ukraine. In 1914 the couple and their children relocated to Chicago, Illinois where the bulk of his father’s family had settled. By this stage, the Browarnik’s had, changed their surname to Brown. Brown had three sisters: Ann (b.1909), Sophie (b.1916) and Riva (b. 1918). His father worked as a cabinet maker and carpenter. There was little work during the Great Depression in the 1920s, so he opened a hardware store in Chicago where the family lived above the shop.

During his high school years, he worked on the local school paper, and he also won a national prize.

After graduating from high school, Brown could not find work so instead enrolled at Crane Junior College. Initially, he was interested in becoming an electrical engineer, but then he was exposed to chemistry and instead decided to focus on that instead. In 1933, after he had finished one semester at Crane Junior College, it was closed down due to lack of funding. Brown then enrolled at the Lewis Institute and studied at night, working part-time as a shoe clerk to help pay his fees. Dr. Nicholas Cheronis who had lectured at Crane Junior College started accepting students into his laboratory and Brown was invited study under him.

In 1934 when Wright Junior College opened, Brown enrolled, graduating in 1935. After applying for and winning a scholarship to the University of Chicago, Brown was a student there between 1935-1936 where he received a B.S. Julius Stieglitz encouraged him to study further because he saw Brown’s potential as a research chemist.

Herbert C Brown then studied with Professor H.I. Schlesinger is researching the hydrides of boron. In 1938 Brown was awarded his Ph.D., and he did postgraduate work with Professor M.S. Kharasch. Professor Schlesinger appointed him his research assistant (1939). He then found a position at Wayne University in Detroit as an Assistant Professor, becoming an Associate Professor in 1947. In 1947 was Brown was offered the job of head of the chemistry department at Purdue University, Indiana. In 1959 he became Wetherill Distinguished Professor, in 1960 Wetherill Research Professor and Emeritus in 1978. Brown supervised a large group of graduate students and postdoctoral researchers including Nobel Laureates Ei-ichi Negishi and Akira Suzuki who studied under him in the 1960s.

Brown was awarded the Nobel Prize in Chemistry in 1979 which he shared with Georg Wittig for their work in the development of the use of boron and phosphorus containing compounds.

On the 6 February 1937 Herbert C Brown married Sarah Baylen who had been a fellow student with him at Crane Junior College. Baylen had always predicted that Brown would one day be a Nobel laureate.

He retired in 1979 but continued as a researcher up until his death.